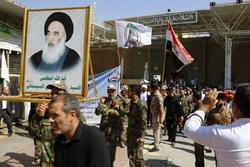 A group of the combatants of “Imam Ali Battalion” renewed allegiance to Imam Ali and Ayatollah Sistani on the fifth anniversary of the issuance of the Fatwa on the Collective Battle.

RNA - A group of the combatnets of “Imam Ali Battalion”, a branch of Iraqi Popular Mobilization Forces (Hashd al-Shabi), renewed the allegiance to Imam Ali and Ayatollah Sistani on the fifth anniversary of issuance of the Fatwa on the Collective Battle against the Takfir terrorist group of DAESH (ISIS or ISIL).

Hujjat al-Islam Sheikh Tahir al-Khaqani and a group of the commanders of Imam Ali Battalion, participating in this ceremony, attended the holy shrine of Imam Ali (AS) and the office of Ayatollah Sistani and then commemorated the anniversary of the issuance of the Fatwa on the Collective Battle.

The Iraqi combatants, carrying the photos of Ayatollah Sistani and the flag of Iraq, recited the slogans and some poems and commemorated the memory of a thousand of the youth who responded to the call to the collective battle and attended the frontline of the battle.

Hujjat al-Islam Tahir al-Khaqani in the said ceremony said, “The Iraqi youth sacrificed their lives in the defense of their own land and cleansed the Iraqi land of the dirt of Takfiri-terrorist ISIS”, he then added, “This ceremony was held in order to renew the allegiance to Ayatollah Sistani, announce the commitment to the regulations, appreciate the pure blood of the martyrs, and support martyrs’ family and the Iraqi nation.”