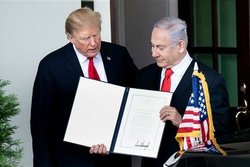 The administration of US President Donald Trump is reportedly planning to hold off releasing the political portion of its Israeli-Palestinian peace plan until after the Israeli elections and after Israel forms a new government.

RNA - Sources familiar with the matter told CNN that Washington does not want the political part of its plan to become an issue for the Israeli elections.

The sources also stated that they have talked with senior White House adviser Jared Kushner and White House Middle East envoy Jason Greenblatt on the matter.

Axios reported that Greenblatt told a conference hosted by the Jerusalem Post that the administration is leaning toward holding off on releasing the political portion of the plan until Israel forms a new government.

The Kushner-Greenblatt team is reportedly still planning to reveal at least parts of the economic portion of the plan at the end of the month at a workshop in Bahrain, yet it is not sure whether the full economic plan will be released.

One source explained that Kushner and Greenblatt see political and economic portions as going "in conjunction" with each other and they know after the political plan comes out, that is where the focus will be.

US sending 1,000 more troops to Mideast for ‘defensive purposes’ amid tensions with Iran