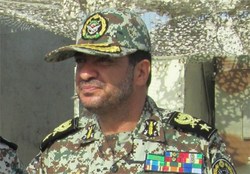 The commander of the Iranian Army’s Air Defense Force has warned enemies against approaching Iran’s borders.

RNA - Brigadier General Alireza Sabahi-Fard said that there was no safe spot for foreign military aircraft within Iran’s aerial or land borders.

“We are warning the enemy: there is no safe zone for extraterritorial military aircraft in Iranian skies and lands. Even approaching Iran’s borders would be met with a strong response. Thus, I advise you to move as much away [from Iran’s frontiers] as you can,” Brigadier General Sabahi-Fard said.

He also said any act of aggression against Iran would bring regret to the enemies.

The Iranian commander said the fact that enemy forces were staying at 200 nautical miles off the Strait of Hormuz was due to Iran’s deterrence power.

The United States has recently taken a quasi-warlike posture against Iran by dispatching an aircraft carrier strike group, a bomber task force, and an amphibious assault ship to the Persian Gulf, citing an alleged Iranian threat.

Iran has said it poses no threat to anyone but will defend itself against any aggression.

Last week, the aircraft carrier USS Abraham Lincoln, which has been dispatched to the Middle East, was reported to have stayed outside of the strategic Persian Gulf waters.

“You don’t want to inadvertently escalate something,” Capt. Putnam Browne, the commanding officer of the Lincoln, was quoted by the Associated Press as saying.