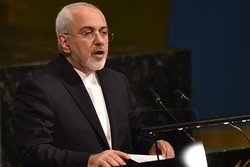 Iran's Foreign Minister Mohammad Javad Zarif has lashed out at US “economic terrorism” against the "innocent" Iranian people, saying war and talks will never go together.

RNA - On his official Twitter page on Monday, Zarif posted a video showing a "little boy whose heartbroken mother can't get him prosthetic legs as he grows" and emphasized that innocent civilians are being targeted by sanctions and economic terrorism applied to Iran by the United States.

#EconomicTerrorism against Iran targets innocent civilians. Like this little boy, whose heartbroken mother can't get him prosthetic legs as he grows. They're sanctioned.
This is @realDonaldTrump's "economic war". And war and talks—with or without preconditions—don't go together pic.twitter.com/ZUqA61iq7D

"This is @realDonaldTrump's 'economic war'. And war and talks—with or without preconditions—don't go together," the top Iranian diplomat pointed out.

Zarif's post came a day after US Secretary of State Mike Pompeo said Washington is keen to hold negotiations with Iran "with no preconditions" amid the intensification of tensions between the two countries.

Addressing a news conference in Switzerland earlier in the day, the US secretary of state said, "We are prepared to engage in a conversation with no preconditions. We are ready to sit down with them."

In reaction to Pompeo's statements, Iranian Foreign Ministry Spokesman Abbas Moussavi said a game of words by the United States is not important to Iran, but the Islamic Republic expects a change in Washington’s general approach to the Iranian nation.

“For the Islamic Republic of Iran, a game of words and expressing covert goals under the guise of new words is not a criterion for action, but a change in the United States’ general approach and practical stance toward the Iranian nation is the criterion,” he said.

On Sunday, Zarif described new US sanctions against Iran as "economic terrorism," warning of “consequences" if the US keeps up its pressure against the Iranian nation.

In an exclusive interview with ABC news on Sunday, Zarif said Washington’s maximum pressure policy "targets ordinary Iranian people" and that Iran will respond in self- defense.

The United States remarkably stoked tensions with Iran in May 2018 when US President Donald Trump pulled his country out of a 2015 nuclear deal between Tehran and six world powers and re-imposed harsh sanctions against the Islamic Republic in defiance of global criticisms.

The tensions saw a sharp rise on the first anniversary of Washington’s exit from the deal as the US moved to ratchet up the pressure on Iran by tightening its oil sanctions and building up its military presence in the region.

Iranian President Hassan Rouhani said in mid-May that the US sanctions against the Iranian nation are a “crime against humanity” as they have effectively targeted ordinary people, hampering their access to food and medicine.

“The hard days and the problems created by the US’ economic war have started,” Rouhani said.