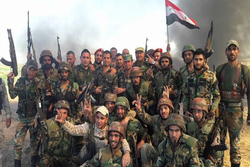 The Syrian Army continued its advances in Northern Syria as terrorist groups prevented civilians from leaving areas under their control in Idlib to the regions controlled by the government forces.

RNA - The Syrian Army foiled the terrorists' attacks after killing a large number of them and destroying several of their military vehicles, including bomb-laden vehicles.

The Syrian Army troops engaged in fierce clashes with the terrorists of Tahrir al-Sham al-Hay'at (the Levant Liberation Board or the Al-Nusra Front) and the National Liberation Front (NLF) who had attacked the government forces' military positions in al-Karkat and al-Hawiz in Northern Hama.

The terrorist groups prevented civilians from leaving areas under their control in Idlib to regions controlled by the Syrian Army in Northern Hama as government forces continue advances in the region.

The Syrian Army troops engaged in fierce clashes with the terrorists of Tahrir al-Sham al-Hay'at and the NLF who had attacked the government forces' military positions in al-Karkat and al-Hawiz in Northern Hama.

The Syrian Army foiled the terrorists' attacks after killing a large number of them and destroying several of their military vehicles, including bomb-laden vehicles.

Meantime, the Arabic-language website of Russian Sputnik News Agency reported that Tahrir al-Sham, Harrasudin and Ajnad al-Qafqaz have blocked the roads leading to Khan Sheikhoun in Southern Idlib and Mourek in Northern Hama as well as the Western section of Abu al-Dhohour crossing.

The Arabic-language service of Russia Today also reported that hundreds of Syrian families gathered near the corridors declared by the Syrian government in Hama and Idlib, and demanded exit from areas under control of terrorists which faced terrorist groups' opposition.

Meantime, a member of the National Peace Committee in Syria Omar Rahmoun also reiterated that the terrorists block civilians' move through confiscating their assets, arresting and torturing them.

The terrorist groups also launched rocket attacks on the town of Qamhaneh in Northern Hama.

The Syrian Army discovered a cache of arms and military equipment, including the US and western weapons, during cleansing operations in Quneitra Province in Southern Syria.

The Syrian Army's engineering units discovered several depots packed with weapons and military equipment, some of them made in the US and the West, left behind by terrorists in several towns and villages in Quneitra Province.

According to Fars News Agancy, the discovered weapons included different kinds of rifles, Rocket-Propelled Grenades (RPGs), machineguns and a large amount of ammunition

A military source, meantime, said that the Syrian Army troops found state-of-the-art telecommunications systems and satellite equipment made in the US and other Western countries.

Hundreds of Syrian civilians have been kidnapped by the Turkey-backed terrorists in Afrin region as the Turkish Army has intensified its occupying measures in Northern Aleppo, media reports said.

The Kurdish-language Hawar News website reported that the Turkish Army and its allied militants have increased their brutalities against civilians, including murdering and abducting them as well as plundering their assets and properties and setting fire on thousands of hectares of lands in the region.

The report said the Ankara-backed militants have arrested hundreds of civilians and stated that they would be released only in return for ransoms, adding that the fate of over 1,100 of these detainees is still unknown.

Meantime, the local sources in the town of Izaz in Northern Aleppo reported that fierce clashes had broken out between the tribesmen of al-Ajil and the terrorists of the Ankara-backed Free Syrian Army (FSA) in Northern Aleppo.

The sources noted that the clashes took place after an Ajil tribesman was arrested by the militants, and said that at least seven people were killed and 10 others were wounded during the clashes.