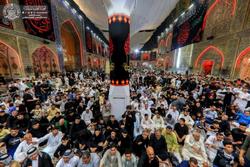 Rasa – A ceremony commemorating the martyrdom of Imam Ali and Laylat al-Qadr (Night of ‎Power) was held at Holy Shrine of Imam Ali ‎in the Iraqi city of Najaf.‎

RNA – A large number of believers and lovers of the Infallible and Purified Household of the ‎Prophet Muhammad from all over Iraq, as well as from other countries, commemorated ‎Laylat al-Qadr (the Night of Power) and the martyrdom of the Commander of the Faithful ‎‎[Imam Ali] at his holy shrine in the Iraqi city of Najaf.‎
‎ ‎
Pilgrims performed the prescribed acts of Laylat al-Qadr, recited the Quran and mourned for ‎Imam Ali.‎

In this regard, the Holy Shrine of Imam Ali used all of its capacities and amenities to serve ‎the pilgrims and commemorate this night. ‎

Hujjat al-Islam Ibrahim al-Badiri, the head of religious assemblies at the Holy Shrine of Imam ‎Ali, announced that since the 16th of Ramadhan, mawkibs ‎and mourning groups have been ‎entering Holy Shrine of Imam Ali ‎in order to organize commemorations. ‎

Haydar Muhammad Jasim, the deputy head of the Department of Services Affairs of the ‎Holy Shrine of Imam Ali, announced that the Holy Shrine has opened the Rasul al-Adham [Great Prophet] ‎Courtyard to welcome millions of pilgrims to the Holy Shrine.‎

Hujjat al-Islam ‎Abdul-Sadah al-Jabiri, the head of the Department of Religious Affairs of the ‎Holy Shrine of Imam al-Husayn‎ in Karbala, said, “On the night of the martyrdom of Imam ‎Ali, many pilgrims ‎referred to the Religious and Legal Inquiries Office to obtain answers to ‎their questions on legal and religious issues.”‎
‎ ‎
He continued, “During the holy month of Ramadhan, especially during the nights ‎commemorating the martyrdom anniversaries and Layali al-Qadr, the religious and legal ‎inquiries offices, located both inside and outside the Holy Shrine of Imam Ali and in the Holy ‎Shrine’s al-Sayyidah Fatimah al-Zahra Courtyard, respond to the pilgrim’s questions.‎
‎ ‎
Distribution of water ‎

Fadhil al-Tabatabai, the official responsible for supplying drinking water to the Holy Shrine of ‎Imam Ali, told reporters about the distribution of one million litres of safe drinking water on ‎the night of the martyrdom anniversary of Imam Ali, saying, “In order to provide this ‎amount of water, we had to increase the working hours at the water treatment plant.”‎
‎ ‎
He added, “On ordinary days, we produce 250 litres of healthy drinking water and place them ‎in different parts of the Holy Shrine of Imam Ali for the pilgrims.”‎