Familiarization of 1,000 Spanish-speaking tourists with Islam since the beginning of the year 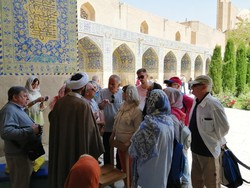 Rasa – Hujjat al-Islam Mohammad Zamani ‎said, “There is a large Spanish-speaking audience ‎is in the world and given the increasing number of Spanish-speaking tourists in Iran, the ‎Islamic Seminaries must make effective decisions to educate the missionaries and promote ‎Islam.”‎

He emphasized that the increasing number of tourists from different countries to Iran varies ‎from year to year for several reasons and noted, “For several years, there were many ‎tourists from Germany and eastern Asia and last year, there were many French-speaking ‎tourists.”‎
‎ ‎
Hujjat al-Islam Zamani added, “On a global perspective, the number of Spanish-speaking ‎tourists is large and come from most of the countries of South America, as well as Spain ‎itself.”‎

His Eminence said, “Fluent Spanish-speaking missionaries have been present every day at ‎Madrassah al-Nasiriyah‎ since the beginning of the new [Iranian] year, and until today, nearly ‎‎200 hours of face-to-face conversation with tourists dedicated to introducing Shi’ism and ‎comprehensive Islamic information has occurred. There have been about 1,000 tourists ‎since the beginning of the year.”‎
‎ ‎
He emphasized that the preparation and delivery of specific books and brief brochures with ‎religious content and which introduce Islam in Spanish for the tourists is another specialist ‎measure which we have pursued and these efforts have been well-received by the tourists.‎
‎ ‎
Hujjat al-Islam Zamani ‎explained that, unfortunately, in Iran, there is no official religious ‎place or particular seminary active in the field of propagation of Islam in Spanish and added, ‎‎“For the first time in Iran, Madrassah al-Nasiriyah has been doing this work with the support ‎of the deputy of the Department of Refinement and Propaganda at the Islamic Seminary of ‎Esfahan for the past several years and has doubled its efforts this year.”‎

He said, “One of the important points for the seminary officials and decision-making centres ‎of the country is that some of the Spanish-speaking countries have a history of Islam, ‎therefore, the grounds for the audience to receive and accept the religion of Islam and its ‎moral education have been laid.”‎

Hujjat al-Islam Zamani ‎added, “Therefore, one of the urgent needs for today is for the ‎officials ‎to take immediate and urgent action to train missionaries in specialized languages ‎such as Spanish and French.”‎

Tags: Spanish Esfahan Zamani Nasiriyah
Short Link rasanews.ir/201rmT
Share
0
Please type in your comments in English.
The comments that contain insults or libel to individuals, ethnicities, or contradictions with the laws of the country and religious teachings will not be disclosed