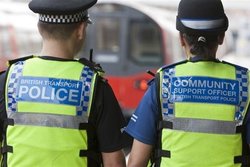 A refugee woman from West Africa has disclosed details of years of abuse at the hands of UK government authorities in the country’s immigration detention centers.

RNA - The anonymous woman told German news channel Deutsche Welle on Sunday that she went through years of institutional abuse in the UK, where she arrived in 2004 with the help of traffickers.

The woman, who had suffered from years of abuse before she was taken to the UK by a female trafficker, said that the interior ministry (Home Office) officials imprisoned her in an Immigration Removal Center in Yarl's Wood, in Bedfordshire, for the first time in 2010, the year she was spotted by the police working in shop as an illegal immigrant.

Authorities then transferred her to a remote place in Wales where no lawyer was ready to go and assume responsibility for the refugee and her asylum application.

"My asylum was refused but the Home Office gave me the right to appeal that decision. But my solicitor abandoned me. Wales was too far for him to come,” said the woman, adding that ministry officials then made her homeless by evicting her from the house she was straying in.

A Congolese woman found her on the street and helped her to lodge another appeal with the help of a London-based charity. However, the charity found that the interior ministry had lost the documents filled in by the destitute woman.

The Home Office then accepted to review the appeal but only to arrest the woman again. The woman said some 15 huge men from the ministry came to detain her at the house of a friend. They even forced her to take a shower in front of them because she had started bleeding when seeing them. They shamed her indefinitely, she said, before she was transferred for a second time to the detention center in Bedfordshire where she experienced the harshest possible treatment for three months.

After some 15 years of staying in the UK, the woman has now been told to return to her country, something she describes as impossible.

The case is one of many being reported from the UK where the government has been accused of harsh treatment against refugees and deliberately trying to reduce immigration numbers.

Rights campaigners have repeatedly slammed London for putting refugees in detention centers without saying when they would be released.

They believe the detention policy is meant to discourage people from coming to the UK and force others to leave the country as soon as they can.

US agreed verbally not to seek death penalty for Assange

‘Truth is treason’ for American Empire