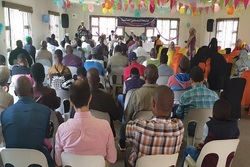 Rasa – A ceremony marking the birth anniversary of Imam al-Mahdi was held by the Shi’ahs ‎of South Africa. ‎

RNA – The 15th of the blessed month of Sha’ban, which marks the auspicious birth ‎anniversary of the twelfth infallible imam, Muhammad al-Mahdi, was celebrated with the ‎presence of the Shi’ah of Johannesburg, the largest city in South Africa, on held on April 20th ‎at the representative office of al-Mustafa International University in the country. ‎

Scholars and Shi’ah personalities of the country attended the ceremony and the teachers and ‎some of the seminarians at the university spoke about Imam al-Mahdi and the 15th of ‎Sha’ban.‎

It’s noteworthy that South Africa is the southernmost country on the African continent and ‎has a population of about a million Muslims. Most of Shi’ahs are immigrants from Pakistan, ‎Lebanon, India and other countries. Johannesburg is one of the fifty largest cities in the ‎world.‎

Imam Muhammad al-Mahdi is the twelfth Imam as per the teachings of Twelver Shi’ism. He ‎is the promised saviour, who will rise one day and fill the earth with peace and justice. Imam ‎al-Mahdi has been in occultation from the early years of his life. Shi’ahs regard him as the ‎Imam of the present age.‎

The president of Ahl al-Bayt Seminary of Liberia:

Imam Hussein is the torch of guidance for the world liberals

Iran to retaliate any US move against IRGC in Persian Gulf