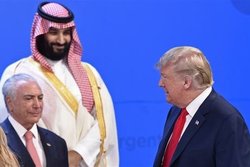 According to a document, issued by the Department of Energy and seen by Reuters on Wednesday, the US firms had requested their government to keep their approvals secret.

“In this case, each of the companies which received a specific authorization for (Saudi Arabia) have provided us written request that their authorization be withheld from public release,” the department’s National Nuclear Security Administration wrote in its document.

In an interview with Press TV on Friday, Professor Petras said, “It’s a very serious and a negative step by the Trump administration that puts in question the whole stability of the Middle East and beyond. The Saudis are completely irresponsible and have demonstrated that in the recent past with their assassinations of [Jamal] Khashoggi and others that have been opposed to Saudi Arabia.”

“Most important of all Saudi Arabia has completely violated any legislation nuclear or otherwise that has taken place in the recent period,” he stated.

“There is no question that the Middle East would be threatened. The Saudis and their incapacity to conquer Yemen perhaps would be an incentive for them to nuclearize the war against the Yemeni people,” he said.

“Most of all the Saudis with access to nuclear weapons would threaten Iran and Iran would have to take its measures to compete with the Saudis by building up their own nuclear capacity,” he pointed out.

“We must recognize that the Saudi Arabians have only one ally in the world and that is the United States. And the United States government has taken very irresponsible steps. They have recognized [al-Quds] Jerusalem as the Jewish city. And Trump has also given the Israelis the Golan Heights,” the analyst said.

“So this is the part of their extremist policy that the US has taken in this region. We must remember that the Trump administration is only acting with the support of a minority of his own party. The Congressmen and the Senators have already stated their opposition to Trump’s position. The main people that are advising Trump are extremists like Pompeo and Bolton,” he noted.