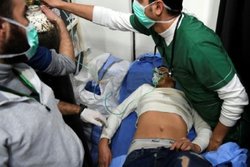 Russia has warned that the intelligence agencies of France and Belgium - in cooperation with terrorists and "pseudo-humanitarian" volunteers - are preparing to conduct a false flag chemical attack in Syria.

RNA - Major General Viktor Kupchishin, the head of the Russian Defense Ministry’s Center for Syrian Reconciliation, said on Friday that the "provocation" would be staged in Syria's terrorist-held Idlib Province to pin the blame on Moscow and Damascus.

"To organize provocations, representatives of the French and Belgian secret services arrived in Idlib. Under their supervision, a meeting was held with the field commanders of the terrorist groups of Hayat Tahrir al-Sham and Hurras al-Din, as well as with the representatives of the pseudo-humanitarian organization ‘White helmets’," he said.

A batch of poisonous gas, believed to be chlorine-based, has already been delivered to a number of Idlib villages, Kupchishin said, adding that the toxic is packed in canisters disguised as oxygen and natural gas tank.

The plotters, he noted, have discussed filming the chemical attack and re-purposing footage of Russia's recent airstrikes on terrorists' arms depots in Idlib.

"From 14 March to 27 March 2019, the representatives of the Belgian secret services recorded strikes on video, which the Russian Aerospace Forces targeted at terror groups' arms depots and footholds of drones on the territory of the Idlib de-escalation zone, in order to subsequently present them as an ‘evidence’ of the use of chemical weapons," the Russian general said.

He further stressed that the “actors” of the false flag attack have been offered some $100 for playing the roles of chemical victims, warning that the militants may even poison people for real in order to make their video more “lifelike."

Syrian refugees and families held by terrorists could have been forced to take part in the staged attack, he added.

Russia has on several occasions warned about false flag chemical weapons attacks in Syria in a bid to justify an ensuing foreign military aggression in the Arab country.

On April 7, 2018, an alleged chemical weapons attack hit the Damascus suburb town of Douma,  just as the Syrian army was about to win the battle against the militants there.

Western states blamed the Syrian government for the incident, but Damascus firmly rejected the accusation.

One week after the suspected gas attack, the US, Britain and France launched a coordinated missile strike against sites and research facilities near Damascus and Homs with the purported goal of paralyzing the Syrian government’s capability to produce chemicals.

This is while Syria surrendered its entire chemical stockpile in 2013 to a mission led by the Prohibition of Chemical Weapons (OPCW) and the UN.

On the contrary, there have been numerous reports suggesting that foreign-backed Takfiri terrorists in Syria have sophisticated chemicals and are using them against civilians.

Tags: France Belgium Syria false flag
Short Link rasanews.ir/201rWS
Share
0
Please type in your comments in English.
The comments that contain insults or libel to individuals, ethnicities, or contradictions with the laws of the country and religious teachings will not be disclosed