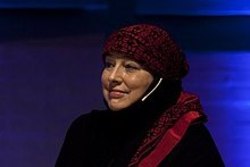 White politicians like US President Donald Trump and the mainstream Western media are partially responsible for Friday's massacre of Muslims in two mosques in New Zealand, according to British journalist and writer Yvonne Ridley.

RNA - The author of several books including The Rise of the Prophet Muhammad, made the remarks in an article – titled The hate triggers which led to the New Zealand mosque massacres – published on Friday, hours after a heavily armed Australian white supremacist gunned down at least 49 Muslim worshipers at two mosques in Christchurch.

The terrorist, a 28-year-old man called Brenton Tarrant, broadcast live footage on Facebook of the deadly attack on one mosque in Christchurch, mirroring the carnage played out in video games. Earlier he published a "manifesto" on Twitter in which he espoused anti-immigrant and Islamophobic ideology, and featured tropes familiar to white supremacist and alt-right movements.

Tarrant also expressed support for Trump as a “symbol of renewed white identity and common purpose.”

“Politicians and the mainstream media should take time out and reflect on the role they may have played which led to the mass killing of Muslim worshipers at two of New Zealand’s mosques in Christchurch,” Ridley wrote.

“What happened during Friday prayers, as 49 innocents were slaughtered by a crazed gunman, went out on a live stream and the killer was apparently ‘cheered on’ by his virtual reality audience who appeared to watch the pornographic violence with some relish,” she added.

She wrote that the terrorist will appear in court on Saturday: “However, I believe we can already apportion some blame to politicians and the media. The Trump administration, for instance, made Muslims the enemy from the moment Donald Trump became US President while Islamophobia is reinforced by the resurgence of the far right and rise of fascism across Europe and beyond.”

“Donald Trump’s hateful rhetoric and that of other white politicians and media influencers have become almost normal as has a hatred of refugees caused by horrific wars across the Middle East and Asia,” she noted.

“The constant conflating of these refugees with so-called ISIS or Daesh goes largely unchallenged and some columnists are even questioning if Islamophobia is real,” the analyst pointed out.