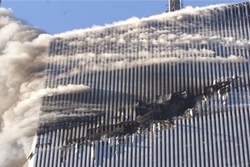 Head of the 9/11 Families and Survivors United for Justice Against Terrorism group Terry Strada has claimed that past US administrations have sided with Saudi Arabia against a lawsuit assessing Riyadh's alleged role in the attack.

"They've all handled it the same," she said, adding that "Democrat, Republican, past administrations, they usually side with the Saudis."

Strada, who lost her husband in the September 11, 2001 attacks, believes ignorance of the kingdom's alleged role in assisting the attack's perpetrators comes as Saudi Arabia continues to fund terrorist organizations.

"I have no reason to believe it stopped because we've never fully admitted it existed in the first place," she said.

Strada's organization represents many 9/11 survivors and affected family members who filed a lawsuit against the kingdom in 2017.

The action came after the US Congress overrode a veto from then-President Barack Obama and passed the Justice Against Sponsors of Terrorism Act (JASTA) in September 2016, opening the door to a legal case assessing Riyadh's role in the incident.

"That's what this lawsuit will do, it will shed a light on the flow of money that continues from the kingdom to the terrorist organizations, and right into the terrorists' hands," said Strada.

"They [the 9/11 hijackers] were here for 12 to 18 months prior to the attacks, buying first-class airline tickets, practicing on our airplanes, learning how fly in our flight schools. All funded by the kingdom of Saudi Arabia," she added

Saudi Arabia has reportedly lobbied heavily to kill the 9/11 law, threatening the US of consequences if it pushes forward with the measure.

The oil-rich kingdom has also faced mounting pressure in recent years over its brutal onslaught on Yemen and the murder of Saudi dissident journalist Jamal Khashoggi.

Saudi Arabia launched a war on the impoverished nation in 2015, resulting in tens of thousands of deaths and putting 14 million Yemenis on the brink of imminent famine.

Saudi Crown Prince Mohammed bin Salman has also been reported to have administered the assassination of Khashoggi – an outspoken critic of his policies – last October at Riyadh’s Istanbul consulate.