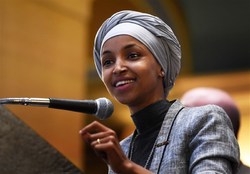 US network Fox News has condemned one of its main female hosts for questioning whether Muslim American Congresswoman Ilhan Omar's religious beliefs stand in opposition to the US Constitution.

RNA - Jeanine Pirro suggested on her Saturday show that statements made by Democratic lawmaker Ilhan Omar about Israel stem from her religion. Omar is Somali-American and a practicing Muslim who observes the Islamic hijab.

"Think about it: Omar wears a hijab," Pirro said on her "Justice" show on Fox News. "Is her adherence to this Islamic doctrine indicative of her adherence to Sharia law, which in itself is antithetical to the United States Constitution?"

In a rare rebuke of one of its star hosts, Fox News condemned Pirro on Sunday.

"We strongly condemn Jeanine Pirro's comments about Representative Ilhan Omar," Fox News said in a statement. "They do not reflect those of the network and we have addressed the matter with her directly.

Pirro was also denounced by figures on both the left and the right on Sunday.

Bret Stephens, a journalist and conservative columnist for The New York Times, said Pirro "is a disgrace." He said "every healthy democracy needs a healthy conservative movement," but "Fox News has become the chief driver in making that movement intemperate, idiotic, and illiberal."

In her own statement on Sunday night, Pirro didn't apologize, saying the intention of her comments "was to ask a question and start a debate."

"Of course because one is Muslim does not mean you don't support the Constitution," she said. "I invite Rep. Omar to come on my show any time to discuss all of the important issues facing America today."

Hufsa Kamal, an associate producer for Fox News host Bret Baier, tweeted, “@JudgeJeanine can you stop spreading this false narrative that somehow Muslims hate America or women who wear a hijab aren’t American enough? You have Muslims working at the same network you do, including myself.”

Omar, a newly elected Democrat representing Minnesota’s 5th congressional district has sparked a firestorm on Capitol Hill over repeated criticisms of Israel and the pro-Israel lobby in Washington that exerts great influence in US politics.

Some Democratic lawmakers in Congress have expressed frustration that Omar has faced an implicit rebuke for her comments, while racist statements by US President Donald Trump and other Republicans go largely unchallenged.

The US House of Representatives passed a resolution on Thursday condemning bigotry and hate after a backlash from a number of factions across the Democratic Party forced changes to a bill that originally focused on anti-Semitism and remarks about Israel by Omar.