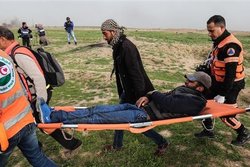 A Palestinian was killed and 47 others were injured on Friday when the Israeli occupation forces opened fire at the peaceful protesters taking part in the Great March of Return in Gaza.

RNA - The ministry of health announced that Tamer Arafat, 23, died after being shot by the Israeli forces East of Rafah city in the Southern Gaza Strip, Palinfo reported.

The health ministry reported that 47 Palestinians were injured, including two women, 15 children, 4 paramedics, and 2 journalists.

Thousands of Palestinians marched along the border fence between the Gaza Strip and the 1948 occupied territories on the 50th Friday of the Great March of Return which was named "Friday of the Palestinian Woman".

The Higher National Committee of the Great March of Return and Breaking the Siege stressed that Friday's protests, which coincided with Women's International Day, were aimed at celebrating Palestinian women and their steadfastness.

Hamas's Spokesman Abdul-Latif al-Qanou' said in press statements that the Palestinian women were and still are the Palestinian men's partners in the fight for freedom and independence.

Al-Qanou' hailed all the Palestinian women who were killed, injured, or jailed by the Israeli occupation.

Tags: Gaza Palestinian Israel
Short Link rasanews.ir/201rSd
Share
0
Please type in your comments in English.
The comments that contain insults or libel to individuals, ethnicities, or contradictions with the laws of the country and religious teachings will not be disclosed