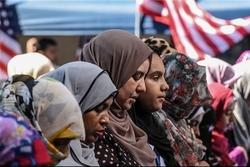 Muslims face more discrimination than any other religious group in the United States, according to a poll of registered voters published on Friday.

The poll’s release comes during a week in which an anti-hate resolution was passed in Congress to condemn anti-Semitism, Islamophobia and other forms of bigotry.

All three Congressional Muslims hailed its passage, calling it "historic on many fronts".

"It’s the first time we have voted on a resolution condemning anti-Muslim bigotry in our nation’s history," Reps. Ilhan Omar, Rashida Tlaib and Andre Carson said in a statement.

The resolution made its way onto the House floor in the wake of comments made by Omar criticizing Israel, sparking outrage among critics, who announced that the remarks were anti-Semitic.

"I want to talk about the political influence in this country that says it is OK for people to push for allegiance to a foreign country," Omar stated at a town hall last week, referring to Israel.

While many in Congress slammed her comments, including Rep. Eliot Engel, who called them "unacceptable and deeply offensive", some lawmakers came to her defense.

"One of the things that is hurtful about the extent to which reprimand is sought of Ilhan is that no one seeks this level of reprimand when members make statements about Latinx + other communities," Rep. Alexandria Ocasio-Cortez said on Twitter.