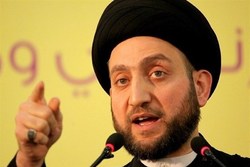 A senior Iraqi official said the head of the country’s National Wisdom Movement (NWM), or Hikma, has rejected several invitations by Saudi Arabia to visit Riyadh.

RNA - The kingdom invited Seyed Ammar Hakim for a visit to the Arabian Peninsula country six times, but all requests were rejected, the high-profile official with the movement, who preferred anonymity, told Tasnim in Iraq on Friday.

He added that any potential visit to Riyadh by Hakim would be conditional on resolving the problems of Shiites living in Saudi Arabia and Bahrain.

The source said visa restrictions for Shiite citizens in the country should be removed so that they can easily travel to Iraq.

The head of the National Wisdom Movement has also called on Saudi officials to arrange a meeting between him and the Bahraini king in a bid to address the problems of the Persian Gulf state’s Shiite population, the official further said.

Both Saudi Arabia and Bahrain have gone to great lengths to clamp down on any sign of dissent. Scores of people have lost their lives and hundreds of others sustained injuries or got arrested as a result of the two regimes’ ongoing crackdown.