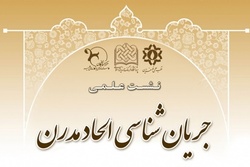 The special session on the “the critical analysis of the modern atheism”, attended by the faculty member of the Islamic Research Institute for Culture and Thought, was held in Qom.

RNA - Hujjat al-Islam Hamidreza Shakerin, the member of faculty for logics of understanding the religion, in the special session on the critical analysis of “the modern atheism”, held in the conference hall of the seminary’s scientific societies, pointed to the breadth of the topic and said, “this issue can’t be dealt with thoroughly, as it is not to be discussed in detail, but we are supposed to discuss its general aspects.

The necessity for the scientific analysis of the modern atheism

The faculty member of the Islamic Research Institute for Culture and Thought, stressing the concerns over the modern atheism, said, “The new or modern atheism should critically be attended as it poses a serious threat. Atheism has a broad range of meaning.”

Saying that to not believe in God is different from atheism, he mentioned, “This ideology also encompasses agnosticism”. Nowadays Atheism is developing differently from the past”.

He stressed, “The modern atheism and its developments should be known.  Atheism used to have a philosophical dimension, but now it attempts to keep away from philosophy. When it is seen from outward, it seems to have some philosophical foundations, but the pioneers of this ideology attempted to drop the philosophy and rely on the experimental knowledge and introduce atheism through experimental sciences.”