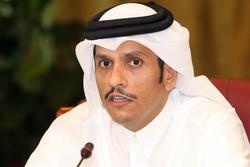 The Qatari foreign minister has criticized the United States, among other international powers, for adopting one-sided approaches in dealing with Middle East issues, saying initiatives that exclude Iran and Palestine will yield no result.

RNA - In an interview with The Guardian on Tuesday, Sheikh Mohammed bin Abdulrahman Al Thani called on international powers, including the US, to be more inclusive in their approach towards the troubled region.

He went on to say that one-sided initiatives that exclude either the Iranians or Palestinians do not work, adding that the Middle East’s polarized and repressive politics will lead to even more instability in the region unless countries take steps to reform and calm tensions.

“Anyone that looks at the situation right now – the polarization in the region – is quite certain that things will not remain like this,” he said.

“You cannot keep people under oppression for a long time, so to prevent this instability from happening, we just want leaders to start reforming. We have to practice preventative diplomacy rather than reactive diplomacy,” Al Thani said.

“Our position on the Iran deal is that, like the Europeans, we support it,” he said. “We do not want a nuclear arms race in our region, and that is the danger.”

He stressed that Qatar’s support for the JCPOA did not mean Doha had now, as some claimed, formed a new axis with Iran and Turkey.

“Not just Saudi Arabia and Iran – all of us are living in the same neighborhood and we need to reach an understanding,” he said.

“That was the common position of the GCC countries until 2017, but the boycott changed everything,” he said, referring to the ongoing Saudi-led blockade against Qatar.

In June 2017, Saudi Arabia, Egypt, Bahrain, and the UAE imposed a land, naval and air blockade on import-dependent Qatar, accusing Doha of supporting terrorism, an allegation strongly denied by Doha.

The Saudi-led bloc presented Qatar with a list of demands and gave it an ultimatum to comply with them or face consequences. Doha, however, refused to meet the demands and stressed that it would not abandon its independent foreign policy.

Iran has taken a neutral stance in the dispute but has on humanitarian grounds sent food supplies to Qatar amid the Saudi-led siege of the country. It has also allowed Qatar’s national carrier to use its airspace.

847/940
Tags: Qatar Iran Palestine Mideast
Short Link rasanews.ir/201rPi
Share
0
Please type in your comments in English.
The comments that contain insults or libel to individuals, ethnicities, or contradictions with the laws of the country and religious teachings will not be disclosed