US, Israeli, Saudi Footprints Found in Former Bases of Terrorists in Southern Syria 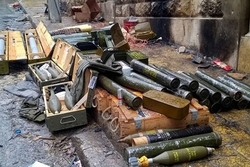 The Syrian army discovered a large number of US, Western, Israeli and Saudi weapons and equipment near Damascus and Quneitra.

RNA - The engineering units of the Syrian army found a cache of weapons, including US-made anti-tank missiles and a large number of West-made guns and heavy machine-guns as well as different types of ammunition, during purging operations in Southwestern Damascus and Quneitra.

They also discovered and seized several US and western communications systems, medical equipment and a large amount of Israeli, Jordanian and Saudi drugs.

In a relevant development last week, the Syrian army discovered a large amount of weapons and military equipment, including US and Israeli missiles, in mop-up operation near Damascus.

The Damascus Army's engineering units continued their cleansing operations around Damascus and retrieved large amount of weapons, ammunition and military equipment, including hundreds of Grad missiles, US-made anti-tank missiles and 128-Caliber missiles made in Israel.

Tags: Syria US Israel Saudi Terrorist
Short Link rasanews.ir/201rPc
Share
0
Please type in your comments in English.
The comments that contain insults or libel to individuals, ethnicities, or contradictions with the laws of the country and religious teachings will not be disclosed