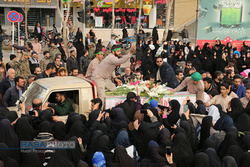 RNA - Head of the Justice Department of Iran’s Southeastern province of Sistan and Baluchistan Ebrahim Hamidi announced on Saturday that 13 individuals linked to the suicide bombing of last Wednesday have been arrested so far.

He added that two of the arrested suspects were women, one of whom has been released.

The official said preliminary investigations are underway into the case and the arrestees and the results will be released later.

The bus carrying the IRGC personnel was hit by an explosives-laden truck on a road from the city of Khash to Zahedan, the capital of the province on February 13.

A statement released by the Quds Base of the IRGC's Ground Force on the same evening said the bus was carrying a group of IRGC personnel "coming back from a border guarding mission when it came under a suicide car attack by Takfiri terrorists", but did not mention the number of passengers.

"27 IRGC members were martyred and 13 others wounded in the terrorist attack so far," the statement said, and further blamed "the intelligence services of hegemonic system - a phrase used normally to refer to the United States and its allies - and Zionism for supporting the attack".

The terror attack has stirred fury among Iranian officials, specially the military brass. On Tuesday, Military Aide to the Iranian Supreme Leader Major General Yahya Rahim Safavi lashed out at Pakistani Intelligence service’s backing for terrorists, advising Islamabad and its intelligence apparatuses that Saudi Arabia is not a reliable partner.

His comments came as Saudis are using aid packages and investment promises to buy the economically embattled Pakistani government's loyalty and convince it to turn a blind eye to their destructive actions within Pakistan's borders, including the Saudi-funded seminaries that have become breeding ground for extremism and terrorism.

In earlier remarks, Safavi had also slammed Saudi Arabia for supporting the terrorist groups acting against Iran, and said Pakistan and its Inter-Services Intelligence (ISI) should account for the recent suicide attack on IRGC.

He referred to insecurities at common borders of Iran and Pakistan in the past, and said, "The Pakistani government should account for this issue."

According to Fars News Agancy, General Safavi further pointed to the main backers and sponsors of the terrorist groups operating against Iran from Southwestern Pakistan, and said, "Proof and evidence shows that these terrorist groups are financially sponsored by a number of Persian Gulf Arab states, including one whose crown prince is in Pakistan at present, alluding to Saudi Arabia."

He added that the same states sponsoring the attack also planned to launch several similar terror attacks on Iran during the ceremonies commemorating the 40th anniversary of the Islamic Revolution in mid-February, which were all defused thanks to the vigilance of the IRGC and other security and intelligence bodies.

Meantime, General Safavi reiterated that Iran wants to have good relations with its neighbors as it believes that insecurity in the region only serves the interests of the United States and Zionists who had gathered in Warsaw conference earlier this week, but vowed that Iran and the IRGC will give a "crushing and proper response in due time to the provocateurs and puppet perpetrators of the terrorist attack against the IRGC".

Tags: Terrorist Attack terrorism Saudi Pakistan IRGC Iran
Short Link rasanews.ir/201rPJ
Share
0
Please type in your comments in English.
The comments that contain insults or libel to individuals, ethnicities, or contradictions with the laws of the country and religious teachings will not be disclosed