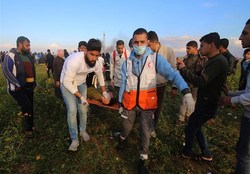 A Palestinian child was killed and dozens of demonstrators wounded afternoon on Friday after the Israeli military violently attacked nonviolent protests on Gaza’s Eastern borders.

The Palestinian Health Ministry noted that at least 41 Palestinians were hit and injured with live ammunition while hundreds of others choked on teargas.

Hundreds of Palestinians flocked to the Awda tents pitched East of the blockaded Gaza Strip to take part in the Great March of Return staged along the Gaza border to push for lifting the Israeli siege on the enclave, ceasing Israeli aggressions on Palestinian civilians, and halting assaults on holy sites across the occupied Palestinian territories.

Tags: Palestinian Gaza Israel
Short Link rasanews.ir/201rPB
Share
0
Please type in your comments in English.
The comments that contain insults or libel to individuals, ethnicities, or contradictions with the laws of the country and religious teachings will not be disclosed