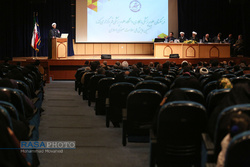 The 6th conference on Spiritual Health was held on February 21st and 22nd in the Ghadir Conference Hall in holy city of Qom by bureau of spiritual health of Iranian Academy of Medical Sciences.

RNA - The 6th conference on Spiritual Health was held on February 21st and 22nd in the Ghadir Conference Hall in holy city of Qom by bureau of spiritual health of Iranian Academy of Medical Sciences.

Dr. Marandi the president of the Iranian Academy of Medical Sciences and the head of the 6th Conference on Spiritual Health stated in his speech in the conference, “Considering the fundamentals and rich contents of spirituality in Islamic religion, if there is attention to spiritual health, there will be wonderful effects in the society.”

“During past centuries Western societies had separated the spirituality and religion from science and consequently have caused tremendous harms to the scientific society”, he added. “We hope we will see the effects of the results of conference in the society”, Marandi said.

Marandi emphasized on the importance of the scientific researches and said, “The Supreme Leader Ayatollah Khamenei, the Sources of the Emulation and the teachers at the Islamic seminary have assisted us to hold this conference and promoting the field of spiritual health.”

The Western one-dimensional look toward sciences challenges the international community

Abolfazl Iranikhah the President of Qom University of Medical Sciences said in the conference that the Western one-dimensional look toward sciences has brought a lot of damages to the world.

He stated, “This (wrong) belief have caused tremendous harms to the humankind and according to the confession of none believers, one-dimensional look to the human beings has made massive damages for them. So they have confessed about the importance of the relation between human and believing in God.”

Spiritual health is the arena of going beyond science borders

Ayatollah Alireza Arafi, head of Iran's seminaries said, “Considering the capacities in spiritual and psychological health, it is possible to go beyond science borders.” “The audience of this speech are the seminary, university and institutions which should protect this field of study so it is possible to go beyond the current scientific territories”, Ayatollah Arafi added.

“By taking steps in this field of study (spiritual health) not only getting closer to the current borders of the science in the world is easy but also overpassing and developing them could be possible”, he stated.

Tags: Spiritual Health Marandi Qom Ayatollah Arafi
Short Link rasanews.ir/201rP6
Share
1
Please type in your comments in English.
The comments that contain insults or libel to individuals, ethnicities, or contradictions with the laws of the country and religious teachings will not be disclosed