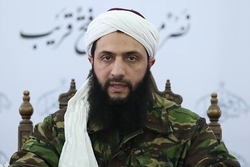 Leader of Tahrir al-Sham al-Hay'at (the Levant Liberation Board or the Al-Nusra Front) terrorist group Abu Mohammed Al-Jolani who was wounded in the recent twin explosions in the Center of Idlib city is now in a state of coma, media reports said.

RNA - "One of those injured in Idlib blasts was severely suffering from brain injury and he was transferred to a government hospital in Antakia City in Hatay region," the Arabic-language service of Russian Sputnik news agency quoted a medical source in Turkey as saying.

Ringleader of Tahrir al-Sham al-Hay'at (the Levant Liberation Board or the Al-Nusra Front) terrorist group Abu Mohammed Al-Jolani who was wounded in the recent twin explosions in the Center of Idlib city is now in a state of coma, media reports said on Wednesday.

"One of those injured in Idlib blasts was severely suffering from brain injury and he was transferred to a government hospital in Antakia City in Hatay region," the Arabic-language service of Russian Sputnik news agency quoted a medical source in Turkey as saying.

The medical source said that the injured person is Abu Mohammed al-Jolani who had shrapnel head injury and he is now in a state of coma.

At least 56 people were killed and wounded in two huge explosions in one of the main bases of Tahrir al-Sham al-Hay'at in Idlib city near the venue of a meeting between al-Jolani and other terrorist commanders.

"Al-Jolani (Al-Nusra Front chief commander) was injured and two of his Uzbek aides were also killed in the twin simultaneous blasts in Idlib's al-Qasour region," the Arabic-language service of Sputnik quoted local sources as saying on Tuesday.

The Syrian Army pounded the headquarters of Tahrir al-Sham al-Hay'at (the Levant Liberation Board or the al-Nusra Front) in Northern Hama and Southern Idlib in response to their intensified attacks from the demilitarized zone on government forces, killing a senior terrorist commander.

The Damascus Army's artillery and missile units targeted and hit Tahrir al-Sham's military positions and movements near Khan Sheikhoun and Ma'arat in Southern Idlib from Sakik and Basida regions.

The battlefield sources also reported that the Syrian Army troops destroyed several terrorist centers in the region, killing a number of them, including a notorious commander named Amin Askar.

The Syrian Army troops also pounded the terrorists' positions and movements in Kafar Zita, outskirts of al-Latamanieh and Hasraya regions in Northern Hama, destroying several of their military positions. The army attacks came in response to Tahrir al-Sham terrorists' missile attacks on the town of Mahradeh and Syrian Army's military point in al-Masasaneh axis.

Tens of civilians left areas under the US Army's control in Al-Tanf region near the borders with Iraq as two human corridors have opened in the region.

Two human corridors were opened in the towns of Jalighim and Jbal al-Gharab after coordination between Russia and Syria for the exit of Syrian citizens stationed in al-Rakban Camp in al-Tanf region in Eastern Homs and near the border with Iraq.

The Arabic service of Russia Today television network reported that the first groups of civilians comprising 23 members of a family, including 17 women and children, arrived in Syria's Southern region after exiting al-Tanf region through Jalighim corridor.

Meantime, the commander of the Center for National Defense of Russian Federation Major General Mikhail Mizintsief also pointed to the disastrous situation of Al-Rakban Camp in al-Tanf region, and said that the Syrian citizens have been taken as hostage by the US-backed militants in this region and despite evacuating two human convoys from this camp, it is still in a horrific situation.

According to Fars News Agancy, he also pointed to lack of primary hygienic facilities in al-Rakban Camp and lack of access by children and women to most basic medial requirements, a sum of eight children have been killed over last month due to food poisoning.

About 50,000 civilians are living in al-Rakban Camp which is controlled by the US-led militants.

The US-led coalition has sent a large number of trucks to Eastern Syria to transfer the ISIL terrorists from Deir Ezzur province after reaching an agreement with the militants, media reports said.

"Some 50 to 60 US trucks arrived in farms located between al-Baghouz and banks of Eastern Euphrates in Eastern Deir Ezzur to relocate the terrorists from the region," the London-based Syrian Observatory for Human Rights (SOHR) reported.

It noted that the arrival of the trucks has taken place in line with taking out the remnants of the ISIL and their families after a covert agreement was reached between the US Army troops and the ISIL terrorists in the region.

The US-led coalition forces are also expected to officially announce the end of the ISIL in the last area under their control in Eastern Euphrates.

The United States has sent tens of trucks with suspicious cargoes from Northern Iraq to Eastern Syria as reports say Washington and its allied militants are readying to declare the end of the ISIL's presence in Eastern Euphrates territories, media reports said.

Tags: Tahrir Al-Sham Turkey Idlib Al-Nusra
Short Link rasanews.ir/201rOs
Share
0
Please type in your comments in English.
The comments that contain insults or libel to individuals, ethnicities, or contradictions with the laws of the country and religious teachings will not be disclosed