Number of Hate Groups in US Reaches 20-Year High 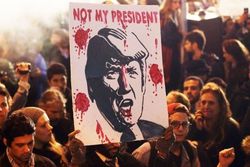 The number of active hate groups in the United Stated has risen to a 20-year high, according to an annual study by the Southern Poverty Law Center (SPLC).

RNA - The number of groups the SPLC says promote hateful ideologies reached a new peak of 1,020 in 2018, up 7 percent since 2017 and 30 percent, from 784, in 2014. The groups include white supremacists, black nationalists, neo-Nazis and more, The Hill reported.

Much of the growth is seen among white nationalist groups, according to the SPLC, which said there were 264 such organizations last year.

“Much of the energy on the radical right this year was concentrated in the white supremacist milieu,” the report noted.

“After a lull that followed the violence in Charlottesville, which brought criminal charges and civil suits that temporarily dampened the radical right's activism and organizing, newer groups gathered momentum,” it added.

The report stated that the groups are fueled by a concern over a shrinking white percentage of the population. The Census Bureau has estimated that white people will make up less than 50 percent of the population by 2044.

The report added that while white supremacist groups are on the rise, membership in the Ku Klux Klan is actually declining, driven in part by an inability to connect with younger people who may share its ideology.

“The KKK has not been able to appeal to younger racists, with its antiquated traditions, odd dress and lack of digital savvy. Younger extremists prefer Fred Perry polo shirts and khakis to Klan robes. It may be that the KKK, having somehow endured since 1866, is finally on its last legs,” the report said.

The report noted that some hate groups point to the Donald Trump administration for inspiration and that the majority of the public, including almost 50 percent of white people, believe the president is a racist. It also added that white supremacist groups that came into existence since Trump announced his campaign in 2015 have boosted their memberships.

Black nationalist and anti-LGBTQ groups have also become more widespread in the past year.

The SPLC pins some of the blame for racial violence on the alt-right political movement.

“In 2018, at least 40 people in the US and Canada were killed by individuals who were either motivated by or attracted to far-right ideologies, embracing ideas and philosophies that are cornerstones of the alt-right,” the report said.

The SPLC predicts that violence connected with hate groups could increase if the various movements become further disillusioned with politics.

“Given these trends, there are no signs that the violence, which has been all too common over the past two decades, will let up. In fact, if the hate movement abandons politics as a solution to demographic change, as recent denunciations of Trump by prominent white supremacists seem to indicate, more angry lone wolves ... may see violence as a solution,” according to the report.

Tags: Trump Hate Groups US
Short Link rasanews.ir/201rOn
Share
0
Please type in your comments in English.
The comments that contain insults or libel to individuals, ethnicities, or contradictions with the laws of the country and religious teachings will not be disclosed