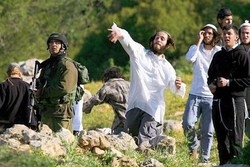 Over the recent days, tension has been running high at and around al-Aqsa Mosque after Israeli settlers locked the al-Rahma Gate before Muslim worshipers. Israeli police also placed chains on a metal gate at the entrance to Bab al-Rahma building to prevent Muslims from using it.

But, Muslim worshipers smashed the iron locks and chains stealthily set up by Israeli police overnight at al-Rahma Gate. Israeli cops violently attacked the Muslim worshipers and arrested scores of them, including women.

Tags: Israel Aqsa Mosque Settler
Short Link rasanews.ir/201rOl
Share
0
Please type in your comments in English.
The comments that contain insults or libel to individuals, ethnicities, or contradictions with the laws of the country and religious teachings will not be disclosed