Details of funeral and burial of Ayatollah Momen announced 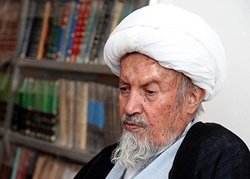 Rasa – The member of the office of the late Ayatollah Momen has announced the plans for ‎the funeral, burial and memorial ceremony of this member of the Guardian Council who ‎passed away on Thursday.‎

RNA – In an exclusive interview with the correspondent of Rasa News Agency, a member of ‎Ayatollah Mohammad Momen’s office described the funeral and burial plans for this ‎jurisprudent member of Iran’s Guardian Council.‎
‎ ‎
He said the funeral procession for Ayatollah Momen will begin on Saturday, February 23rd at ‎Imam Hasan al-Askari Mosque in Qom at 10:00 am and then the body of His Eminence and ‎the mourners will move toward the Holy Shrine of Lady Fatimah al-Ma’sumah where he will ‎be buried. ‎

This member of Ayatollah Momen’s office stated, “Ayatollah Sayyed Musa Shobeyri-Zanjani, ‎one of the sources of emulation, will lead the funeral prayers and the body of this mujahid ‎scholar will be buried near the resting place of Lady Fatimah al-Ma’sumah.”‎

Ayatollah Momen passed away at the age of 81 in a hospital in Tehran on Thursday, ‎February 21st after spending the past two months battling with brain hemorrhage and ‎respiratory problems.‎

An influential member of the Guardian Council, he was first appointed to the position by late ‎founder of the Islamic Republic Imam Khomeyni in 1984 and continued to serve in that ‎capacity after Ayatollah Khamenei extended his assignment in 2014.‎

The late cleric also served as a member of the Assembly of Experts after being elected ‎during all of the governmental body’s five elections so far. He also served as the deputy ‎head of the council from 2008 to 2011.‎

Tags: Momen Qom Funeral Khamenei
Short Link rasanews.ir/201rOR
Share
0
Please type in your comments in English.
The comments that contain insults or libel to individuals, ethnicities, or contradictions with the laws of the country and religious teachings will not be disclosed