Dozens of Gazans injured during protest against Israeli blockade 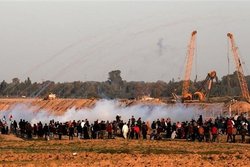 Dozens of Palestinians have been injured as hundreds of people staged another demonstration near the Gaza Strip’s northern maritime border with the Israeli-occupied territories against the Tel Aviv regime’s 12-year naval blockade.

RNA - The spokesman for the Gaza Ministry of Health, Ashraf al-Qidra, said in a statement that 39 protesters were struck with live bullets on Tuesday as they participated in the 24th weekly naval march near Zikim naval base, which lies just north of Gaza.

Israel imposed a limit of three nautical miles on fishing in the waters off the Gaza shore until August 2014, when Palestinian fishermen were allowed to go out six miles under a ceasefire agreement reached between the Israelis and Palestinians following a deadly 50-day Israeli war in the same month.

The fishing zone is supposed to extend to 20 nautical miles under the Oslo Accords. The Oslo Accords were signed between the Israeli regime and the Palestine Liberation Organization (PLO) during the early-mid 1990s to resolve the Israeli-Palestinian conflict.

In May 2017, Israeli authorities increased the fishing area for Gaza fishermen to nine nautical miles.

Over the past few years, Israeli forces have carried out more than a hundred attacks on Palestinian boats, arresting dozens of fishermen and confiscating several boats.

Palestinians have held weekly protests on the Gaza border, over the siege on the enclave and the right for refugees to return to their homes they were forcibly expelled from during the 1948 creation of Israel.

The Gaza clashes reached their peak on May 14 last year, on the eve of the 70th anniversary of the Nakba Day (Day of Catastrophe), which coincided this year with the US embassy relocation from Tel Aviv to occupied East Jerusalem al-Quds.

On June 13, 2018, the United Nations General Assembly adopted a resolution, sponsored by Turkey and Algeria, condemning the Israeli regime for the death of Palestinian civilians in the Gaza Strip.

The resolution, which had been put forward on behalf of Arab and Muslim countries, garnered a strong majority of 120 votes in the 193-member assembly, with eight votes against and 45 abstentions.

Tags: gaza Israel Palestinian
Short Link rasanews.ir/201rOO
Share
0
Please type in your comments in English.
The comments that contain insults or libel to individuals, ethnicities, or contradictions with the laws of the country and religious teachings will not be disclosed