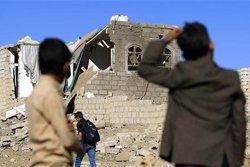 Despite the dire need for a ceasefire in Yemen, the United States Army says it is still providing support for the war, which Saudi Arabia and its allies are waging against the impoverished country.

RNA - The US continues to "provide support to the coalition,” Major General David C. Hill, deputy commander of US Army Central, told AFP on the sidelines of a military exhibition in the Emirati capital Abu Dhabi on Sunday.

Hill was referring to a Saudi-led coalition, gathering many of the kingdom’s allies, which have been pounding Yemen since March 2015 to restore its former Riyadh-allied government.

The general alleged that the US assistance was particularly meant "to help them....be discriminative in targeting and to minimize the risk of civilian causalities."

The World Health Organization says some 10,000 people have been killed since the coalition launched the war, but rights groups put the death toll at five times higher.

The US has been generously providing arms support for the kingdom and its allies over the course of the war. It also lends the coalition logistical assistance, including bombing coordinates. A US commando force is, meanwhile, deployed near the Saudi-Yemeni border to seek and destroy the arms caches belonging to Yemen’s popular Houthi Ansarullah movement, which defends the country against the invaders.

Last November, Washington stopped providing aerial refueling for the coalition’s warplanes. It only halted the support after the coalition grew independent of it.

According to Press TV, the remarks by Hill come at a time when the United Nations is pushing for the implementation of a ceasefire in the western Yemeni province of Hudaydah, whose capital serves as the main point of entry for most of Yemen’s imports.

The world body would be expanding the truce to the rest of the country if the high-stakes agreement holds. The Houthis, however, say the coalition has repeatedly violated the truce agreement.

On Wednesday, the US House of Representatives voted overwhelmingly to direct President Donald Trump to end within 30 days all participation in hostilities "in or affecting Yemen."

Trump could use his veto power to strike down the resolution if it clears the Senate too.