Bomber, 2 other terrorists in Iran attack were Pakistanis 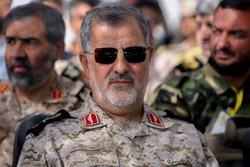 A senior Iranian military commander says a suicide bomber and two other terrorists involved in a recent deadly attack that targeted members of the Islamic Revolution Guards Corps (IRGC) have been identified as Pakistani nationals.

The IRGC personnel were traveling between the cities of Zahedan and Khash, in Sistan and Baluchestan Province on Wednesday, when their bus was targeted in a suicide car bomb attack.The so-called Jaish ul-Adl terrorist group claimed responsibility for the bombing, which left 27 dead and 13 others injured..

Following the incident, Pakpour said, wreckage of the car, which had been used to carry out the attack, was delivered to police for further investigation.

Once the vehicle's registration was identified, members of the Quds Force launched an operation to arrest the terrorists and dismantle their support team, he explained.

Pakpour, who was speaking on the sidelines of a ceremony commemorating the martyrs of the terror attack, also said that three other members of the terror team were from Iran’s Sistan and Baluchestan, two of whom were in detention and the third one was still at large.

The IRGC general said the terrorist team was well equipped and had been working on massive attack schemes inside Iran.

Meanwhile, Iranian Intelligence Minister Mahmoud Alavi on Tuesday pledged that a harsh response will be delivered to the perpetrators.

According to Press TV, Iran has so far received dozens of messages of condemnation and condolence from foreign governments and international bodies, including the European Union. The US and its regional allies have so far remained silent.

The US and Persian Gulf Arab countries on Thursday gathered in the Polish capital of Warsaw to attend an anti-Iran conference ironically entitled “Peace and Security in the Middle East.”

Iranian Foreign Minister Mohammad Javad Zarif said it was not coincidental that the terrorists attacked on the same day that the anti-Iran summit, organized by the United States, kicked off in Poland.

Tags: IRGC Pakistan Iran
Short Link rasanews.ir/201rOD
Share
0
Please type in your comments in English.
The comments that contain insults or libel to individuals, ethnicities, or contradictions with the laws of the country and religious teachings will not be disclosed