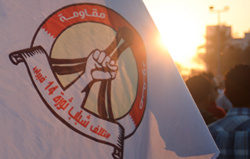 Rasa – Bahrain’s February 14 Youth Coalition‎ condemned the participation of the Al Khalifah ‎regime at the recent Warsaw Summit and warned that this regime must not pollute Bahrain ‎by inviting Zionist officials to Manamah.‎

RNA – The February 14 Youth Coalition said that the participation of Khalid ibn Ahmad Al ‎Khalifah, the Bahraini Foreign Minister, at the Warsaw Summit in Poland was an interpretation ‎of the position of the king of the tiny Persian Gulf kingdom in regard to relations with the ‎Zionist regime.‎
‎ ‎
The coalition said that all segments of the Bahraini people despised the actions of the Al ‎Khalifah regime to normalize relations with the Zionist regime.‎

The coalition also warned the Al Khalifah regime of “polluting Bahrain” by inviting Zionist ‎authorities to visit Manamah and said, “If the regime does such an action, it will face the ‎anger of the people.”‎
‎ ‎
On the sidelines of the anti-Iran Warsaw Summit which was organized by the United States, ‎the Bahraini Foreign Minister told The Times of Israel ‎of the “eventual” establishment of ‎diplomatic relations with Tel Aviv and a trip by the current Israeli current prime minister, ‎Benjamin Netanyahu to Manamah.‎

In regard to this news, Bahrainis have held rallies across the country to mark the eighth ‎anniversary of their popular uprising against the ruling monarchy.‎

Pro-democracy protesters in several cities called for an end to human rights violations and ‎the release of rights activists.‎

Since February 14th, 2011, Bahraini people have been holding peaceful protest rallies on an ‎almost daily basis. They are complaining about widespread discrimination against the Shi’ah ‎majority in the kingdom.‎

The Bahraini regime, backed by forces from Saudi Arabia, the United Arab Emirates and ‎Pakistan, began a deadly crackdown on protesters, which has led to thousands of arrests, ‎scores of deaths and systematic torture of detainees.‎

The two-day, hastily organized Warsaw Summit, which ended on February 14th, was billed as ‎a Middle East security conference but it was an open secret that the gathering of more than ‎‎60 countries was really about getting the world on board with the United States’ tough-on-‎Iran policy, even though the United States denied that was the case.‎

Tags: Warsaw Summit Bahrain February 14 Youth Coalition Poland Al Khalifah
Short Link rasanews.ir/201rO3
Share
0
Please type in your comments in English.
The comments that contain insults or libel to individuals, ethnicities, or contradictions with the laws of the country and religious teachings will not be disclosed