"Stability, Security" in Syria Strengthens with US Pullout 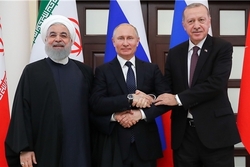 The Presidents of Iran, Russia and Turkey stressed in a final statement issued at the end of the high-profile Sochi summit on Syria on Thursday that the United States' possible retreat from Syria would help strengthen stability and security in the war-torn country.

RNA - The three chief executives voiced their strong opposition to the start of any new war in Syria under anti-terrorism claims, and stressed that they would show resolve in preserving and protecting Syria's sovereignty and territorial integrity.

To this end, they added, the US military pullout, if it happens, would be a positive move in line with reinvigorating security and stability in Syria.

Meantime, the trio reiterated in their statement that they would also stand tough against "separatist" moves.

Hassan Rouhani, Vladimir Putin and Recep Tayyip Erdogan gathered in Sochi on February 14, 2019 for a Tripartite Summit on Syria.

Below you may find the full text of the joint statement by the three presidents: