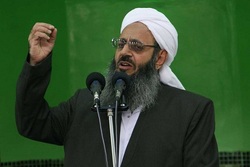 RNA - Molavi Abdul Hamid, the Friday prayers leader of Sunnis Makki Mosque in Zahedan city, in a statement on Thursday said that said no doubt that people of Sistan and Balouchestan province in Southeastern Iran, who favor peace and stability in light of freedom, suffer more than any other because of this terrorist attack.

He also wished divine forgiveness for the IRGC martyrs, patience for their bereaved families and swift recovery for the wounded.

Dozens of IRGC members were killed or wounded after their bus came under a terrorist attack in Iran's Southeastern Sistan and Balouchestan province on Wednesday evening.

The bus was carrying IRGC personnel on a road from the city of Khash to the provincial capital of Zahedan when a truck loaded with explosives and moving alongside the bus detonated.

A statement released by the Quds Base of the IRGC's Ground Force said the bus was carrying a group of IRGC personnel "coming back from a border guarding mission when it came under a suicide car attack by Takfiri terrorists", but did not mention the number of passengers.

"27 IRGC members have been martyred and 13 others wounded in the terrorist attack so far," the statement said, and further blamed "the intelligence services of hegemonic system - a phrase used normally to refer to the United States and its allies - and Zionism for supporting the attack".

The US officials have repeatedly stressed that they would take every possible measure to pressure Tehran, including support for groups operating against Iran. The incident came hours before the start of a US-sponsored security conference against Iran in Warsaw, Poland.

US Secretary of State Mike Pompeo told Fox News last month that Washington would jointly host a global summit focused on Iran and the Middle East in Poland in February, but senior US diplomats later softened tone to shift the conference title to security in the Middle-East, denying that Iran will top or be the main agenda. The gathering takes place in Warsaw from February 13 to 14, the US State Department said in a statement.

The IRGC Ground Force then blamed foreign intelligence services for supporting and assisting the terrorist group.

Jeish al-Adl also abducted five Iranian border guards in Jakigour region of Sistan and Balouchestan Province and took them to Pakistan in 2014. After two months of abduction, four of them were released and the fifth one was killed. His body was returned to Iran months later.

Then early in March, 2015, Pakistani sources told the country's media that authorities in Southwestern Pakistan had arrested the ringleader of Jeish al-Adl terrorist group as he was traveling on a bus from the lawless border area.

Salam Rigi, cousin of the Jundollah terrorist group's ringleader Abdolmalek Rigi, was seized by Pakistani authorities who were tipped off to his movements and intercepted the bus some 50 km from Quetta, the capital of Pakistan's Baluchistan, a security official said on the condition of anonymity.

Salam Rigi was accused of involvement in suicide bombings in Iran and Pakistan, as well as sending terrorists to the conflicts in Iraq and Syria.

Other sources said the terrorist arrested was Abdo-Sattar Rigi (Abdolmalek's brother), explaining that he was carrying his cousin's ID card at the time of arrest, but further investigations revealed his true identity.

Later reports proved that the captured terrorist was Abdo-Sattar Rigi.

According to Fars News Agancy, Abdo-Sattar (the third of the notorious Rigi brothers) headed the Jeish al-Nasr terrorist group, but his cousin Salam leads Jeish al-Adl.

Abdo-Sattar's two older brothers, Abdolmalek and Abdolhamid Rigi, who led the more powerful terrorist group, Jundollah, were both captured and condemned to death by Iran earlier.

Abdolhamid had conducted a number of bombing operations and other violent attacks in Iran resulting in many casualties and was sentenced to death by the court in 2009, but his execution was delayed on several occasions. Officials did not mention any specific reason for the delayed execution of Abdolhamid at the time.

Iran arrested Abdolmalek Rigi, the number one man of the Jundollah terrorist group in late February 2011. Abdolmalek was executed in June 2011.

The two sides' state and military officials have exchanged frequent visits to enhance anti-terrorism cooperation specially in border regions. In early December, top security officials from Iran and Pakistan met in Iran’s Southeastern city of Zahedan to hold the 22nd joint meeting on border cooperation between the two countries.

Late in October, Commander of the IRGC Ground Force Brigadier General Mohammad Pakpour announced his forces' preparedness to launch joint operations against the terrorists who abducted the Iranian border guards in Southeastern Iran.

"We have had different contacts with the Pakistani army and urged them to guarantee extradition of the outlaws and healthiness of the abductees and they should show more responsibility," General Pakpour said, referring to the fate of the 9 border guards that are still kept by Jeish Al-Adl.

"These terrorists have a stronghold and a base on Pakistan's soil and we are prepared for any joint operations with the Pakistani army against the outlaws to release the hostages," he added.

Tags: terror attack terrorist Iran IRGC Molavi Abdul Hamid Terrorist Attack
Short Link rasanews.ir/201rNZ
Share
0
Please type in your comments in English.
The comments that contain insults or libel to individuals, ethnicities, or contradictions with the laws of the country and religious teachings will not be disclosed