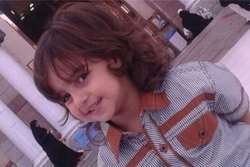 The Organization of the Islamic Republic of Iran's Youth for Human Rights blasted the brutal beheading of a six-year-old Saudi boy in Medina, urging the world activists to reveal the real face of Wahhabi criminals to prevent repetition of such crimes.

RNA - "We cannot believe witnessing martyrdom of another victim of the blind bias of a Wahhabi" man which unfortunately faced silence of those who claim to be advocates of human rights, a statement by the Organization said on Wednesday.

It added that the savage murder also revealed the ignorance of Saudi rulers and their criminal supporters.

The statement condemned the brutal act, calling on all freedom-seeking people across the world to disclose the nature of such criminals to prevent repetition of similar crimes.

According to what recently surfaced on social media, the small boy named Zakariya Bader al-Jabir was savagely murdered by a taxi driver in front of his mother late last month. Shiite Rights Watch (SRW) said the boy was murdered after he was confirmed to be Shiite.

“From Damascus to Turkey to Medina, the fire of crimes committed by al-Saud, which flared up once by ISIL in Damascus and Baghdad, then with the brutal murder of Khashoggi in Turkey, and today with the beheading of an innocent child in Medina, has triggered a series of crimes against humanity that have revealed their malicious and mercenary nature in service of the enemies of Islam.”

The killing of the six-year-old boy in broad daylight in Saudi Arabia generated a wave of shock and revulsion and drawn attention to the brutal nature of Wahhabi school of thought which governs the kingdom.

The killer repeatedly stabbed Zakariya in the neck with a piece of broken glass until he was beheaded, witness accounts of the gruesome killing said.

The child and his mother were reportedly attacked by the apparently sole assailant while they were on their way to visit the shrine of Prophet Mohammed (Peace Be Upon Him).

Shiite Rights Watch, a Washington-based advocacy group, said on Saturday the incident was “a result of ongoing violations against and lack of protection of the Shiite population by Saudi authorities".

"Saudi Shiite have been under military crackdown by their government and many Shiite are in prisons and on death row," it added.

According to reports, Saudi officials were quick to state that the killer suffered from psychological problems.

Kuwaiti cleric Yasser Al-Habib, however, dismissed those claims, saying they are meant to acquit the murderer or reduce his possible punishment.

Ahmad Abul Ali, executive director of Child Development Center in the Eastern Province which is populated mostly by Shiite Muslims, called for protection for all children in the kingdom, online newspaper Hasanews reported.

Ademrights, an Iraq-based rights group, also denounced the killing and held Saudi authorities responsible for fueling violence against the Shiite minority in the Wahhabi-dominated kingdom.

The murder of the Saudi child, it said, is more dangerous than the crimes committed by the ISIL terrorists in Iraq and Syria.

Takfirism is the trademark of many terror outfits operating in the two countries. The concept is largely influenced by Wahhabism, the radical ideology dominating Saudi Arabia and freely preached by Saudi clerics.

Riyadh is widely believed to be a key sponsor of Takfiri terrorist groups.

The regime has also adopted a zero-tolerance approach toward dissent, the latest example of which is the killing of journalist Jamal Khashoggi.

Tags: Human Rights Iran Saudi
Short Link rasanews.ir/201rNE
Share
0
Please type in your comments in English.
The comments that contain insults or libel to individuals, ethnicities, or contradictions with the laws of the country and religious teachings will not be disclosed