Iranophobia a US-led business to rob Arabs of their wealth 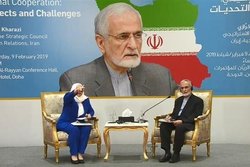 A top Iranian foreign policy official has said that the United States and other big powers have always been seeking to instill fears in the Arab world about Iran’s growing influence only to make them more dependent on the West.

RNA - Kamal Kharazi, who serves as the chair of Iran's Strategic Council on Foreign Relations, said Saturday that it was a policy of Washington to try to distort Iran’s image in the eyes of the public in the Middle East so that it could justify its weapons deals with the governments in the region.

“The business of Iranophobia has been created just to impose their policy on some countries in the region and take their money in exchange of supporting for their security,” said Kharrazi, adding, “There are lots of investment in the region to provoke Iranopphobia and Americans especially are pushing for Iranophobia.”

The former Iranian top diplomat made the comments in response to a question by a Jordanian journalist during an event hosted by Al Jazeera Centre for Studies (AJCS) in Doha, Qatar.

He said that it was the policy of the US President Donald Trump and other Western leaders that the more countries in the region become afraid of Iran, the more they become dependent on Americans and other big powers.“Mr Trump has not been hiding his position, he has been saying that if you want security, you have to pay for it,” Kharrazi said, adding, “Once he (Trump) said that if we take out our support from Saudi Arabia they have to speak Persian in two week’s time.”

The senior official said that as a result of Saudi Arabia constantly paying into American coffers for its security, the kingdom’s reserve has been reduced from $750 billion to $300 billion.

“Just by spending their money on nonsense, on useless wars,” said Kharrazi.

He added that the public in the Arab world and in the region should know that all West’s efforts on Iranophobia would be in vain and Iran would survive at the end.

“One has to understand that in the long-run, Iran would survive and public opinion would come to this understanding that all of these scenarios were a fake," Kharrazi said, adding that Iran survived after years of Iraqi-imposed war in the 1980s despite the fact that many Arab countries and others were supporting Iraqi dictator Saddam Hussein.

He said that just like the war with Saddam, Iran will come out of the current Iranophobia battle without receiving support from any other country.

“So don’t hurry, just wait, this atmosphere would pass and at the end of story you would find that who has been right,” said Kharrazi.

Tags: Kharrazi Iranophobia Arab
Short Link rasanews.ir/201rLo
Share
0
Please type in your comments in English.
The comments that contain insults or libel to individuals, ethnicities, or contradictions with the laws of the country and religious teachings will not be disclosed