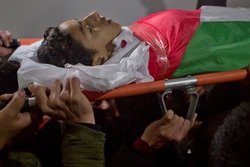 Palestinians took to the streets on Saturday for the funeral of a 14-year-old boy killed by Israeli troops during Gaza protests a day earlier.

RNA - The boy was identified as Hassan Shalabi by Gaza's health ministry. Israel's military said it had opened fire in response to explosives and rocks hurled at the border fence. Gaza health officials said an 18-year-old was also shot dead during the protests.

Tags: Palestinian Israel Gaza
Short Link rasanews.ir/201rLi
Share
0
Please type in your comments in English.
The comments that contain insults or libel to individuals, ethnicities, or contradictions with the laws of the country and religious teachings will not be disclosed