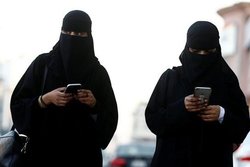 Authorities in Saudi Arabia have created an application that allows male guardians to track their female family members and prevent them from traveling due to a recent rise in the number of women fleeing the oil-rich and ultra-conservative kingdom.

RNA - The app, called Absher meaning "Good Tidings" in Arabic, allows men to obtain or revoke their authorization with a few clicks.

Through Absher, men can perform several tasks, such as paying parking fines, renewing driving license, and granting travel permissions to their female “dependents,” such as wives, daughters and sisters.

It is equipped to give a comprehensive readout of each journey a registered woman has made. Her male guardian can anytime access his own travel logs along with those of children and women in the family.

The app also gives men the ability to receive SMS alerts, when one of their female family members shows their passport at the border or at an airport.

The Saudi Ministry of Interior sends the message directly through the application.

According to a report by investigate website the Insider, Saudi women seeking asylum overseas had to resort to stealing their male guardians’ phones to disable the app or to secretly give themselves permission to travel before fleeing the country.

Other women have already tried to change the alert phone number so that tracking SMSs are sent to them rather than their guardians.

American giant technology companies Apple and Google have come under fierce criticism for hosting the application, and have been accused of helping "enforce gender apartheid" as the app is available on Google Play and Apple's App Store.

Amnesty International, Human Rights Watch, and women's rights groups have called on the technology giants to reconsider hosting the app.

“Apple and Google have rules against apps that facilitate threats and harassment. Apps like this one can facilitate human rights abuses, including discrimination against women,” Human Rights Watch said in a statement.

According to Press TV, Saudi law states it is essential for all women to have a legal male "guardian," usually a father or husband, who can “watch over” their movements and daily routines.

It is estimated that more than 1,000 women try to flee Saudi Arabia every year, excluding cases which are unrecorded due to family-shaming.

Last month, Saudi teenager Rahaf Mohammed al-Qunun was granted asylum in Canada. She had fled to Thailand trying to reach Australia via Bangkok, but was initially told to return to Kuwait, where her family was waiting.

Her case attracted international attention on social media after she barricaded herself in a Bangkok airport hotel room to resist being sent home to her family.

Qunun told Canada's CBC News network and the Toronto Star daily newspaper on January 14 that she had been beaten up for not praying and locked in the house for six months for cutting her hair short.

"I was exposed to physical violence, persecution, oppression, threats to be killed," she said.

“I felt that I could not achieve my dreams that I wanted as long as I was still living in Saudi Arabia.

“It's daily oppression. We are treated as an object, like a slave. We could not make decisions about what we want,” the Saudi teenager pointed out.

Tags: Saudi female track application
Short Link rasanews.ir/201rLh
Share
0
Please type in your comments in English.
The comments that contain insults or libel to individuals, ethnicities, or contradictions with the laws of the country and religious teachings will not be disclosed