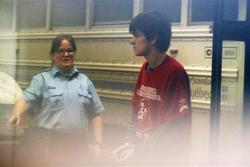 A Canadian man, who fatally shot six people in a terrorist attack on Quebec City’s grand mosque in 2017, has been sentenced to life in prison.

RNA - Quebec Superior Court Justice Francois Huot handed down the life sentence to Alexandre Bissonnette on Friday, however, announcing that the convict could be eligible for parole after serving between 35 and 42 years.

The 29-year-old French-Canadian pleaded guilty last March to six counts of first-degree murder and six counts of attempted murder for the attack, described as one of Canada's rare mass shootings.

The shooting, which Canadian Prime Minister Justin Trudeau denounced as “an act of terrorism against Muslims,” sparked dispute over the treatment of new arrivals at a time when a growing number of refugees and asylum seekers crossed from the United States into the province of Quebec.

The judge said while making the ruling on Friday that the day of the murders “will forever be written in blood in the history of this city, this province, this country.”

According to Press TV, Justice Huot also rejected calls by prosecutors to impose six consecutive life sentences, which would have prevented Bissonnette from seeking parole for 150 years, saying that the request was "unreasonable.”

A 2011 legal change has allowed Canadian judges to hand down consecutive sentences in the case of multiple murders since Canada abolished the death penalty in 1976.

The judge recounted Bissonnette’s remarks to a prison social worker in September 2017, when he expressed a desire for "glory" in shooting worshipers at the Islamic center and that he “regretted not shooting more.”

According to a refugee advocacy group, Bissonnette had been known for his “far-right” views and had reportedly espoused support for the French far-right party of Marine Le Pen at that time.

Between 2012 and 2015, hate crimes targeting Muslims increased by 253 percent, according to Statistics Canada data.

In 2017, the total number of hate crimes in Canada reached an all-time high, the national statistics office said. The spike was heightened by attacks on Muslims, Jews and black people, among others.

Tags: Canadian Quebec mosque Muslim
Short Link rasanews.ir/201rLf
Share
0
Please type in your comments in English.
The comments that contain insults or libel to individuals, ethnicities, or contradictions with the laws of the country and religious teachings will not be disclosed