US Wants to Remove Venezuela From the Playing Field 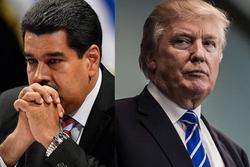 The Trump Administration has ruled out any dialogue with Venezuelan President Maduro.

RNA - The regime change cult on the Capitol Hill has further dismissed the idea of mediation within Venezuela. It’s appetite for destruction and it’s happening again right in front of our eyes:

- Efforts by the United Nations and Latin American leaders to resolve the Venezuela crisis with diplomacy and mediation has gone nowhere, as the US is against such efforts, saying the world needs to unite behind a demand for unconditional regime change.

- The new sheriff in Washington has declared the “time for dialogue with Maduro has long passed,” and that the US now wants everyone to accept Juan Guaido as his replacement. Washington never gave any time for President Maduro because no one at the White House believes in dialogue and diplomacy. They just want to remove Venezuela from the playing field. It’s the same sentiment that turned Syria and Yemen into failed states. Making things worse, Navy Admiral Craig Faller, the head of US Southern Command, says the military is fully prepared to protect US diplomatic personnel and facilities in Venezuela if necessary.

- The Trumpsters, not to be outdone by their predecessors, have come up with two enemies lists. The first one was coined by John Bolton, who is now National Security Adviser. He has come up with the “troika of tyranny” to describe Cuba, Venezuela and Nicaragua, where he sees “the dangers of poisonous ideologies without control.” Secretary of State Mike Pompeo has also been looking at Venezuela. He has declared that “the Maduro regime is illegitimate and the US will work diligently to restore a real democracy to that country.” They both talk about the same thing: regime change for countries that are reluctant to fall in line with Washington’s demands. Other regimes with awful human rights records – to include Saudi Arabia and Israel - are given a pass as long as they stay aligned with the US on policy.

- The decision of the Trump administration to recognize the member of the Venezuelan opposition, Juan Guaidó, as an unelected “interim president,” will make the situation in the South American country increasingly tense, with efforts to force the current government out of power having grown in intensity over the past few days. President Maduro has managed to maintain his position thanks to the loyalty of the country’s well-armed military, in addition to popular support from Venezuelans who voted for Maduro, as well as Venezuelans who don’t like Guaido, a politician hand-picked and imposed upon them by Washington.

Taken together, the long-standing campaign to effect regime change in Venezuela - a campaign that has been ongoing ever since Hugo Chávez, Maduro’s predecessor, was elected in 1998 - will go nowhere. The Trump administration officials are free to stick to their dream of installing a “friendly” government in the world’s most oil-rich country. But that will be it.

According to Fars News Agancy, the substantial concern is that the US might turn to other means to bring about regime change, including the instigation of a new proxy war. After all, the US has not ruled out direct military intervention, and based on its troubling history of ousting Latin American governments through coups, the US might follow the roadmaps of destruction it used to push for regime change in both Syria and Ukraine.

Indeed, there is this danger of another major proxy war, this time in Latin America - much like what has transpired in Syria and Ukraine. The manufacture of such a conflict might pit the US against both Russia and China, both of which have invested heavily in Venezuela, and by extension in the current government, for nearly two decades. The troubling thing is that the US has already laid much of the groundwork for such a proxy war and the chaotic situation on the Venezuelan-Colombian border offers US intelligence enough cover to funnel arms, money and personnel into Venezuela to further destabilize the country. President Maduro says the US has already been doing this for much of the past year.

It is now up to the United Nations and the international civil society to stop Washington’s new appetite for destruction, an effort to push the already tenuous situation in Venezuela to its boiling point. The US has made it clear that it plans to continue pushing for escalation. In pursuit of regime-change agenda and as part of a larger strategy of containment aimed at Russia and China, the US seeks to manufacture a “humanitarian” justification for regime change, funneling of arms and weapons into the country via its foreign borders, mass funding of the political opposition, and covert involvement of intelligence agencies, particularly the CIA.

Given the precarious situation, the roadmap for Venezuela is national dialogue and reconciliation, not effectively creating two governments, the clearest consequence of which would be to deepen the rift in Venezuelan society by forcing citizens to choose sides and take up arms.