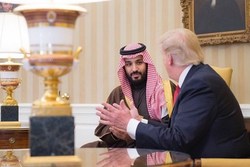 The chairman of the US House Foreign Affairs Committee said on Wednesday he was troubled by a report that Saudi Arabia transferred weapons to extremist groups in Yemen and questioned whether Congress should consider more restrictions on weapons sales to the Riyadh-led coalition.

RNA - The committee voted 25 to 17, along party lines, in favor of a war powers resolution that would prevent the American military from providing any support to the Saudis and other countries waging war on Yemen, Middle East News reported.

"These reports are very troubling and the [Donald] Trump administration must investigate further and work to prevent this from happening again," Democratic Representative Eliot Engel, chairman of the House of Representatives Foreign Affairs Committee, said at a hearing.

"Should Congress pursue greater restrictions on offensive weapons to the Saudi coalition?" asked Engel, who as chairman has the right to review and put "holds" on major foreign weapons sales.

The State Department noted that it was investigating the allegations.

"We are aware of these reports and seeking additional information," a department official said, adding that all such reports are taken seriously.

Critical comments from Engel and other committee members were only the latest recent expressions of frustration with Saudi Arabia from US lawmakers. Members of Congress have been angered by steep civilian casualties in Yemen, human rights abuses and the killing of Saudi journalist, Jamal Khashoggi at a Saudi consulate in Turkey in October 2018.

President Donald Trump's administration opposed many of the bills, calling the Saudis important regional partners and praising weapons sales as an important source of US jobs.

None of those bills became law, but Engel stated that the committee would continue to press for a response to casualties in Yemen, Khashoggi's killing and the imprisonment of women's rights activities.

"It can no longer be business as usual. We need to push for a real change in Saudi behavior," he stressed.

Representative Michael McCaul, the panel's top Republican, called Khashoggi's murder "a major setback" in the US-Saudi relationship and deplored civilian casualties in Yemen. However, he opposed the war powers resolution seeking to bar US military support for the Saudi-led coalition, saying it "could disrupt US security cooperation with partners around the world".

To go into effect, the war powers resolution must pass the full House of Representatives and the Senate, where Trump's fellow Republicans hold a slim majority, and be signed into law by the American president. If Trump declined to sign the resolution, the measure would have to garner the two-thirds majority support in both the House and Senate needed to overcome a presidential veto.

A report on Monday revealed that Riyadh is “transferring” American weapons to al-Qaeda terrorists and Salafi militias in Yemen.

Saudi Arabia and its main accomplice in the war on Yemen, the UAE, “have used the US-manufactured weapons as a form of currency to buy the loyalties of militias or tribes, bolster chosen armed actors, and influence the complex political landscape”, CNN said in a report, citing local commanders on the ground and analysts.

The report claimed that Ansarullah fighters have also managed to gain access to the weapons “exposing some of America's sensitive military technology to Tehran”.

During his maiden state visit, Trump went to Saudi Arabia where he signed a massive $110 billion arms deal with the oil-rich kingdom. According to the Department of Defense, the monarchy is breaking the terms of its arms deal with Washington.

The Monday report further suggested that the American president “has lost control over” the royal family, questioning whether it is “responsible enough to be allowed to continue buying the sophisticated arms and fighting hardware”.

An investigation by Amnesty International revealed that the United Arab Emirates (UAE) has been funneling Western-supplied arms to “out-of-control” militias notorious for committing war crimes against Yemenis.

In a press release, Amnesty said the investigation “has highlighted how the UAE is arming out-of-control militias operating in Yemen with a range of advanced weaponry - much of it sourced from Western countries, including the UK”.

The statement added that the militants were being armed despite their “atrocious human rights records”, their being unaccountable to any government and the accusations of war crimes and other serious violations facing them.

The investigation “shows how the UAE has become a major conduit for armored vehicles, mortar systems, rifles, pistols, and machineguns - which are being diverted” to the militants.

The Amnesty stated that the UAE also funded and trained the militants. It named some of the UAE-backed militant outfits as “Security Belt”, “Shabwani Elite” forces, and “The Giants Brigades”. The first two outfits, it noted, run “a shadowy network of secret prisons” in Yemen.

“Amnesty and others have documented these forces’ role in disappearances and a range of human rights violations at these facilities - including detention at gunpoint, torture with electric shocks, waterboarding, hanging from the ceiling, sexual humiliation, prolonged solitary confinement, squalid conditions and inadequate food and water,” the statement read.

Western countries have supplied the UAE with at least $3.5 billion worth of arms since March 2015, when Saudi Arabia and the Emirates and a coalition of their other allies, invaded the impoverished country to reinstall its Riyadh-allied former government.

The Amnesty said while knowing about the share of the violations attributed to the UAE, the US, the UK, Germany, France, Australia, Belgium, Brazil, Bulgaria, the Czech Republic, South Africa, South Korea, and Turkey were still selling weapons to Abu Dhabi.

“Meanwhile, Denmark, Finland, Norway, and the Netherlands have announced suspensions in arms transfers to the UAE,” it added.

an Oxfam representative stated that the US, UK, and French governments are behind millions of people starving in Yemen because they are “supporting this war".

Tags: US Saudi Yemen
Short Link rasanews.ir/201rLH
Share
0
Please type in your comments in English.
The comments that contain insults or libel to individuals, ethnicities, or contradictions with the laws of the country and religious teachings will not be disclosed