Iraq will not be used against other countries, prime minister says 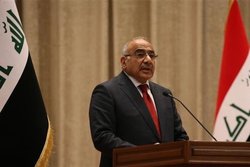 Iraqi Prime Minister Adil Abdul-Mahdi has strongly condemned latest remarks by US President Donald Trump that American forces must remain in Iraq so Washington can keep a close eye on neighboring Iran, stressing that his country will not accept being used for any acts of aggression against other states.

RNA - “There are no US military bases in Iraq; but there are indeed trainers operating within the framework of the international coalition. We disagree with the American side and reject such a standpoint.

“I will not allow Iraq to be used by any country against another. Iraq should not be a party to any battle between two states,” Abdul-Mahdi told reporters.

On Monday, Iraqi President Barham Salih hit back at Trump’s comments, saying, “The Iraqi constitution rejects the use of Iraq as a base for hitting or attacking a neighboring country.

He said Trump did not ask Iraq's permission for US troops stationed there to “watch Iran.”

“US forces were in the country legally under an agreement between the two countries, but that any action taken outside this framework is unacceptable,” he added.

“Don’t overburden Iraq with your own issues. The US is a major power...but do not pursue your own policy priorities, we live here,” Salih pointed out.

“It is of fundamental interest for Iraq to have good relations with Iran” and other neighboring countries, he added.

According to Press TV, in an interview with CBS television network broadcast on Sunday, Trump highlighted the importance of a military base in Iraq, saying it was crucial to the surveillance of Iran’s activities.

“We spent a fortune on building this incredible base, we might as well keep it. And one of the reasons I want to keep it is because I want to be looking a little bit at Iran,” he said in an apparent reference to Ayn al-Asad Airbase in western Iraq, which he paid a visit to during an unannounced trip to the country last December.

When asked whether he planned to use US forces in Iraq to “strike” Iran, Trump responded, “No… all I want to do is be able to watch.”

Tags: Iran Iraq US
Short Link rasanews.ir/201rKk
Share
0
Please type in your comments in English.
The comments that contain insults or libel to individuals, ethnicities, or contradictions with the laws of the country and religious teachings will not be disclosed