Israeli forces shoot Palestinian boy in head with live round 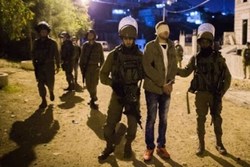 Israeli forces have killed a Palestinian teen and wounded another in the occupied West Bank.

RNA - A Palestinian Red Crescent spokesperson, Mahmoud al-Saadi, said the Israeli forces fired at the two teenagers who happened to pass by on a motorbike by the Jalameh checkpoint Monday.

The two men were rushed to the hospital in the Northern city of Jenin.

The young man, who is identified as 19 year-old Abdullah Tawalba, did not survive the shot to his head.

His companion, who remains unidentified, is reported to be in stable condition.

In an expected turn of events, the Israeli army shifted the blame onto the victims, stating they had opened fire at "two assailants who hurled an explosive device" near the aforementioned checkpoint.

The atrocity comes only a day after a young man succumbed to his wounds inflicted by the occupying Israeli forces during a "Great March of Return" less than a week ago.

Tags: Palestinian Israel West Bank
Short Link rasanews.ir/201rKZ
Share
0
Please type in your comments in English.
The comments that contain insults or libel to individuals, ethnicities, or contradictions with the laws of the country and religious teachings will not be disclosed