Solidarity conference on “Kashmir and Yemen” held in Qom, Iran 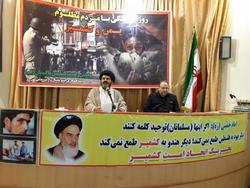 RNA – In an conversation with Rasa News Agency, Mohammad Rafiq stated that on February ‎‎5, 2019, a conference entitled “The Day of Solidarity with the Kashmiri and Yemeni People” ‎was held in the city of Qom, Iran. This conference was organised by Tehreek-e-Ittehad ‎Ummat Jammu and Kashmir, the International Wilayat Mission and the Majlis Branch of ‎Majlis-e-Wahdat Muslimeen in Qom.‎

The conference was presided over by Hujjat al- Islam Dr. Sayyed Shafaqat Zaydi Sahab, a ‎senior member of Majlis-e-Wahdat of Pakistan. ‎

During his speech at the conference, he condemned the brutal Killings of Muslims in Kashmir ‎and Yemen. He urged Muslim communities to support people of Kashmir and Yemen openly. ‎

Hujjat al-Islam Zaydi, also condemned the silence of Muslim nations and human rights ‎organisations of the world in regard to the atrocities in Yemen and Kashmir.‎

‎“Saudi Arabia and India must end violence and killing spree in Yemen and Kashmir ‎respectively, at earliest possible and these states must be allowed to decide their future,” ‎Hujjat al-Islam Zaydi said.‎

Other speakers also spoke on this occasion and urged India and Pakistan to enter into ‎dialogue to resolve the long-unsolved Kashmir Issue. One of the speakers said, “We pay ‎homage to the sacrifices of our brethren in Kashmir and reiterate our unflinching, moral and ‎political support for the just cause of people of Kashmir and Yemen.”‎

Speakers accused the world bodies and leading powers of being biased towards people of ‎Yemen and Kashmir. ‎

Banners and posters and images of Yemeni and Kashmiri men and women and children were ‎displayed in this conference showing the brutalities of the Indian occupation forces in ‎Kashmir and Saudi-led coalition in Yemen. Hundreds of pamphlets containing detailed reports ‎about killings, property damage, human rights violations in Kashmir were also distributed at ‎the end of this conference. ‎

Banners and posters with messages of Ayatollah Khomeyini and Ayatollah Khamenei on ‎them read, “Sympathy, solidarity and assistance to the people of Kashmir is one of the great ‎duties of the Islamic ummah.”‎

Large gatherings of scholars and students from different nations attended the “Solidarity ‎Conference.” Special prayers were also held for the people of Kashmir and Yemen.‎