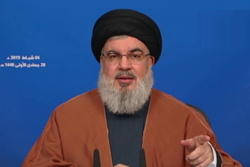 The secretary general of the Lebanese Hezbollah movement strongly dismissed latest remarks by Israeli Prime Minister Benjamin Netanyahu that the movement is in control of the Lebanese government, stressing the new administration belongs to all political factions.

RNA - The Israeli premier is “provoking the United States, European countries and the (Persian) Gulf states against the Lebanese government, claiming that it is controlled by Hezbollah. Such false claims have serious international repercussions,” Seyed Hassan Nasrallah said as he addressed his supporters via a televised speech broadcast live from the Lebanese capital Beirut on Monday evening.

Nasrallah underscored that the new Lebanese government consists of various political parties, and that Hezbollah is just one of them, Press TV reported.

In response to certain media reports that the new health minister is a member of Hezbollah, Nasrallah pointed out that Jamil Jabak, who is a doctor by profession, is solely close to the resistance movement, but not a member of it.

Nasrallah's remarks echoed that of Hezbollah’s deputy chief, Sheikh Naim Qassem, who had said a day earlier that only three of Lebanon's new government ministers were members of Hezbollah, adding, “We are only 10 percent (in the Lebanese cabinet).”

Elsewhere in his speech, the Hezbollah chief emphasized that the Health Ministry in the new national unity government must strive to supply medicine and health care to people from all walks of life.

According to Press TV, he called on the new government to be transparent, advising Lebanese politicians to make decisions, which would best serve the interests of the Arab country and its nation.

The Hezbollah secretary general also urged Lebanese political figures to stick to political calm after the formation of the new national unity government, asking them to resolve their differences through dialog and negotiations.

He said the fight against corruption must be the top priority of the new government in Beirut.

Tags: Nasrallah Netanyahu Israel
Short Link rasanews.ir/201rKJ
Share
0
Please type in your comments in English.
The comments that contain insults or libel to individuals, ethnicities, or contradictions with the laws of the country and religious teachings will not be disclosed