Iran Not to Accept Europe's Conditions on INSTEX 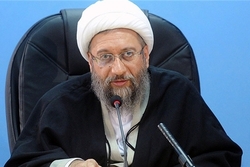 RNA - "The Europeans have created a mechanism with limited capacity after 9 months of procrastination and negotiations not for money transactions but for supplying food and drugs," Amoli Larijani said, addressing the judiciary officials in Tehran on Monday.

He added that the Europeans who claim to be supporting the 2015 nuclear deal after the US withdrawal have set two surprising conditions for implementation of the INSTEX, noting that one of them is Iran's accomplishment of FATF action plan and another one is negotiations on Tehran's missile power.

"These countries should know that the Islamic Republic of Iran will not accept these humiliating conditions at all," Amoli Larijani underscored.

In reaction, Iranian Foreign Ministry Spokesman Bahram Qassemi said that the special financial mechanism for trade with Iran launched by the UK, France, and Germany is a first step which should be followed by quicker implementation of the EU's May 2018 undertakings.

In relevant remarks on Friday, a key member of Iran's Expediency Council stressed that the EC would continue discussions over the fate of the UN Convention on Transnational Organized Crime (Palermo) without being influenced by Europeans' request for the approval of the convention as a prerequisite for the operation of the INSTEX.

"EU's Special Purpose Vehicle (SPV, recently renamed as INSTEX) will not influence the Expediency Council's decision on the approval (or disapproval) of Palermo convention," former Iranian Defense Minister Brigadier General Ahmad Vahidi, also a member of the Expediency Council and the current president of the National Defense University, told reporters in Tehran on Friday.

"The EU's yesterday move was only a small part of the European states' undertakings with regard to Iran under the nuclear deal (JCPOA); and of course, the fate of this minimum undertaking is still not clear in terms of action," he continued.

He underlined that Palermo Convention should be further examined, and said, "The Financial Action Task Force (FATF) recommendations threaten Iran's economy and it is a framework adopted by the global arrogance to impose restrictions on Iran and pursue the sanctions re-imposed against Tehran in smarter ways."

According to Fars News Agency, Palermo bill is one of the four government bills seeking to bring Iran's anti-money laundering and countering terrorism financing standards into line with those defined by the FATF.

The parliament has approved all the measures but except for the bill that updates Iran's domestic law on countering financing of terrorism. All the rest have been rejected by the Guardian Council – a watchdog that ensures laws are in line with the Constitution and Sharia.

The bills on Iran’s accession to the Palermo Convention and the convention against the funding of terrorism (CFT) were rejected by the Guardian Council in early November due to some flaws that violated the country’s Constitution. The bills were then amended by the Iranian Parliament, waiting for the next steps in the Guardian Council.

Yet, Iran has recently approved a national anti-money laundering (AML), which was a domestically-developed bill.

In its October meeting, the FATF decided to extend the deadline for Iran until February to complete reforms under the specified action plan that includes a list of 9 major moves, including the opening of its financial transactions data bank to the FATF that is headed by the US Department of the Treasury’s Assistant Secretary heading the Office of Terrorist Financing and Financial Crimes Marshall Billingslea.

The Political-Defense-Security and Legal-Judicial Commissions of the EC declared last month that endorsement of the Palermo bill would run against the country's interests.

Tags: Judiciary Chief Sadeq Amoli Larijani INSTEX US FATF
Short Link rasanews.ir/201rKI
Share
0
Please type in your comments in English.
The comments that contain insults or libel to individuals, ethnicities, or contradictions with the laws of the country and religious teachings will not be disclosed