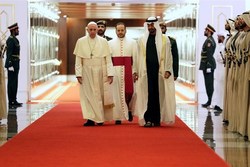 Pope Francis landed in the United Arab Emirates on Sunday, just hours after issuing his strongest condemnation yet of the Saudi war in Yemen, where his host has a leading military role.

RNA - Shortly before departing for Abu Dhabi, Pope Francis said he was following the humanitarian crisis in Yemen with great concern, using his regular Sunday address in Vatican City to urge all sides to implement a fragile peace deal and help deliver aid to millions of hungry people.

“The cry of these children and their parents rises up to God,” he told tens of thousands of people in St. Peter’s Square.

“Let us pray strongly because they are children who are hungry, who are thirsty, they don’t have medicine and they are in danger of death,” he said before boarding his flight.

The UAE welcomed the Pope’s message on Yemen and believes the peace deal he referred to was a historic breakthrough, Minister of State for Foreign Affairs Anwar Gargash wrote on Twitter.

“Let us assure its implementation and make 2019 the year of peace in Yemen,” he said after the pope landed in Abu Dhabi, Reuters reported.

Both men will hold meetings with Pope Francis on Monday.

The UAE plays a leading role in the Saudi-led war against Yemen.

The United Nations is trying to implement a truce and troop withdrawal deal in the main Yemeni port of Hudaydah, agreed at the December talks as a step that could pave the way for negotiations to end the war.

According to Tasnim News Agency, the pope will meet Muslim leaders and celebrate an outdoor mass for some 135,000 Catholics, an event with no precedent on the Arabian peninsula. He has said the trip, which ends on Tuesday, is an opportunity to write “a new page in the history of relations between religions”.

The UAE, which named 2019 its Year of Tolerance, says the visit reflects its history as a “cradle of diversity”.

But it faces criticism from human rights groups for jailing activists, including Ahmed Mansoor, an Emirati who is serving a 10-year sentence for criticizing the government on social media.

“We are calling on Pope Francis to raise the issue of their incarceration with his hosts, and urge their immediate and unconditional release,” Amnesty International said in a statement on Saturday.

UAE authorities did not immediately reply to a request for comment.

Tags: UAE Saudi Pope
Short Link rasanews.ir/201rKD
Share
0
Please type in your comments in English.
The comments that contain insults or libel to individuals, ethnicities, or contradictions with the laws of the country and religious teachings will not be disclosed