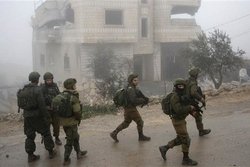 RNA - In its latest report, OCHA said Israeli soldiers shot and killed a man in Nablus on January 21, a teenage boy near a village in Ramallah on January 25, and another man in East Jerusalem al-Quds on the same day.

The first man was killed over an alleged stabbing attack, the minor over alleged stone throwing, and the third Palestinian after he purportedly failed to stop his vehicle after an order.

The report added that the three separate killings brought to 11 the number of the Palestinians shot dead by Israeli troops in the West Bank since the beginning of December last year.

The Israeli military regularly opens fatal fire on Palestinians, accusing them of seeking to attack its personnel.

“In the West Bank, the Israeli authorities demolished 20 Palestinian-owned structures, displacing 26 Palestinians, and affecting the livelihood of 54 others,” the OCHA further said, confirming that 19 of the buildings — 13 of which were in Area C — had been demolished due to the lack of difficult-to-obtain Israeli building permits.

According to Press TV, the Israeli authorities frequently demolish Palestinian buildings and residences in Area C, with Bedouin and herding communities being particularly vulnerable to that practice.

The OCHA report further said that Israeli forces had uprooted 1,250 Palestinian-owned olive trees in the West Bank, affecting the livelihood of six families.

International bodies and rights groups argue that Israel’s sustained demolitions of Palestinian homes and structures in the occupied West Bank and East Jerusalem al-Quds are an attempt by the Tel Aviv regime to uproot Palestinians from their native territory and confiscate more land for the expansion of illegal settlements.

Tags: Israel Jerusalem al-Quds UN
Short Link rasanews.ir/201rK9
Share
0
Please type in your comments in English.
The comments that contain insults or libel to individuals, ethnicities, or contradictions with the laws of the country and religious teachings will not be disclosed