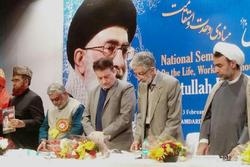 Rasa – A two-day seminar honouring the Supreme Leader of Iran’s Islamic Revolution has ‎been held in the Indian capital of New Delhi.‎

RNA – In an exclusive conversation with Rasa News Agency, Ovain Ali, a revolutionary ‎student in Indian-occupied Kashmir, stated that the National Seminar on the Life, Works and ‎Thoughts of Ayatollah Sayyed Ali Khamenei, was held on February 2-3, 2019 at Jamia ‎Hamdard in the Indian capital of New Delhi by the efforts of the Majlis-e-Ulama-e-Hind, the ‎Department of Islamic Studies at Jamia Hamdard, New Delhi and the Welayat Foundation in ‎New Delhi.‎

The purpose of this great scientific event was to introduce and analyze the personality, ‎works and thoughts of Ayatollah Sayyed Ali Khamenei, the Supreme Leader of the Islamic ‎Republic of Iran.‎

Ovain Ali stated that this seminar didn’t have a political dimension and it was purely scientific ‎and academic because Ayatollah Khamenei, while being a prominent and great religious ‎scholar is a far-sighted thinker in the international, cultural and social fields. ‎

‎“In this regard, 42 works of Ayatollah Khamenei translated into English, Hindi and Urdu were ‎released during the seminar and the seminar was being conducted with the efforts of the ‎Department of Islamic Studies of Jamia Hamdard,” he told Rasa News Agency. ‎

During the inaugural session of the seminar, a book comprising poems by 75 poets of India ‎in Urdu highlighting the personality of Ayatollah Khamenei was also released.‎

Tags: Conference Ovain Ali India New Delhi Khamenei Iran Supreme Leader
Short Link rasanews.ir/201rK5
Share
0
Please type in your comments in English.
The comments that contain insults or libel to individuals, ethnicities, or contradictions with the laws of the country and religious teachings will not be disclosed