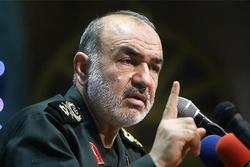 Tehran has so far been developing a missile program within the framework of its defensive needs, an IRGC Commander said, warning that pressure to limit Iran’s defense capabilities will leave the country with no option but to further develop its missile capabilities.

RNA - Lieutenant Commander of the Islamic Revolution Guards Corps (IRGC) Brigadier General Hossein Salami said that if Western powers seek to limit Iran’s missile power, the country will have no option but to expand its potentials in the strategically important field.

Salami made the remarks late on Saturday that Iran’s strategy to maintain a cap on its missile power will change if the European Union and others seek to force the country into disarmament.

The remarks come amid statements by certain EU governments about the need for Iran to avoid long-range missile tests in order for the country to enjoy the economic benefits of a nuclear agreement it signed in July 2015 with world powers.

The missile is due to be delivered to the Islamic Revolution Guards Corps (IRGC) Aerospace Force.

According to Fars News Agency, Iranian officials have repeatedly stressed that the US pressures have failed to force Tehran compromise and curb its defense and missile capabilities.

"We have (earlier) said about the missile issue that we will not compromise at all about our country's defense issues and will not allow others to interfere in it," Secretary of Iran's Supreme National Security Council (SNSC) Ali Shamkhani said last month.

He, meantime, reminded that Iran's missile capability is "defensive and deterrent".

Shamkhani referred to the US President Donald Trump's economic pressures against Iran with the aim of forcing the country to accept Washington's irrational and hegemonic demands, and said, "We will not compromise our honor under Trump's bullying. This is the clear message of the Iranian government to the White House; sanctions will no way serve as an instrument to enforce renegotiations on issues already agreed upon."

Tags: IRGC Salami Iran
Short Link rasanews.ir/201rK4
Share
0
Please type in your comments in English.
The comments that contain insults or libel to individuals, ethnicities, or contradictions with the laws of the country and religious teachings will not be disclosed