The invincible taboo of Israel has collapsed 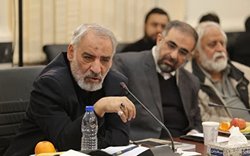 Rasa – Dr. Dastmalchian said that during its scandalous defeat in 33-Day War in Lebanon in ‎‎2006, the mythical theory of the invincibility of Israeli security crumbled which was due to ‎the fact that Hujjat al-Islam Sayyid Hasan Nasrallah used a clever and tactical tactic that ‎helped defeat the theory.‎

RNA – The first meeting of the “Review of the Strategies For Combatting Zionism” was held ‎‎in the conference hall of Rasa News Agency in Qom.‎

Dr. Ahmad Dastmalchian, a former Iranian ambassador to Jordan and Lebanon, said, “In ‎fact, we recognize the importance of this meeting because for some time there has been an ‎evil triangle which is attempting to marginalize the struggle against the Zionist regime, which ‎is why I believe we must work to awaken the struggle against this evil triangle, especially the ‎Zionist regime, in the minds of the people.”‎

Referring to the fact that even in Iran there are many attempts to confront the subject of ‎Palestine, he said, “That is why these meetings are very important and strategic and we ‎must work to ensure that these meetings are held at different levels, especially in the Islamic ‎Seminary of Qom, which is the heart of the Muslim world, until this issue is at the forefront.”‎

He said in another part of his remarks, “We hope that these meetings will continue at ‎various higher levels, an important issue today is the examination of the status of the ‎Palestinian resistance.”‎

Dr. Dastmalchian said that during its scandalous defeat in 33-Day War in Lebanon in 2006, ‎the mythical theory of the invincibility of Israeli security crumbled which was due to the fact ‎that Hujjat al-Islam Sayyid Hasan Nasrallah used a clever and tactical tactic that helped ‎defeat the theory.‎

Arguing that Sayyid Hasan Nasrallah called the military power of Israel into question, he said, ‎‎“Lebanon threatened Israeli security with the simplest missile and this considered as a great ‎deal of pain for Israel.”‎

He said, “Today the Islamic Resistance has the upper hand in the region and we have been ‎victorious in the hard war but we must know that we are far behind in the soft war.”‎

Dr. Dastmalchian saying that without a soft war, we can not achieve the desired outcome in ‎a hard war, he pointed out, “Therefore, there must be mechanisms from these meetings ‎that will correct these actions.”‎

Tags: Dastmalchian Israel Resistance Palestine Zionism conference
Short Link rasanews.ir/201rJz
Share
0
Please type in your comments in English.
The comments that contain insults or libel to individuals, ethnicities, or contradictions with the laws of the country and religious teachings will not be disclosed